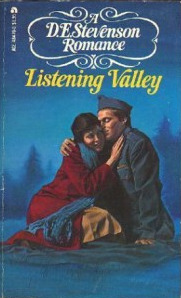 Just a couple of weeks ago I managed to buy an old copy of Listening Valley by D.E. Stevenson in Edinburgh, sadly it doesn’t have it’s dust jacket though. I can’t say I’m all that keen on the cover of the paperback above, but I suppose it’s better than nothing.

The book begins with the Edinburgh childhood of Louise and Antonia Melville. On the surface they have a very comfortable upbringing, it would seem that money was no problem. But in truth they’re really emotionally neglected children, brought up by the nannie. They both have the same problem – they weren’t born a boy and both parents wanted a boy, particularly their father as his family home was a castle and he wanted to pass it on to a son. In disappointment he ended up selling the castle. Their mother was a bridge fiend and playing bridge seemed to take up all of her time. She was disappointed because she thought of her girls as being very dull compared with other children she met, but as she never took the time to get to know her daughters she had no idea of their real personalities at all.

Inevitably both girls marry young, Tonia marries a man even older than her father is but he’s kind and wealthy and gives her some badly needed confidence, in wartime they move to London and experience the Blitz.

Eventually the action moves back to Scotland where Tonia settles close to what had been her father’s country estate. But the war is still very much in evidence with an airfield very close by. Tonia’s home becomes a meeting place for young airmen who never knew when their number would be up.

I thoroughly enjoyed this one, it has some truly ghastly characters in the shape of sponging relatives, I have a feeling that they crop up from time to time in Stevenson’s books, she must have been bothered by some I think! I bet they never read her books though.