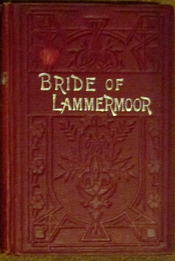 I was quite pleased to get The Bride of Lammermoor by Sir Walter Scott for my Classics Club Spin book, because I often need my arm twisted a wee bit to get down to reading more of Scott’s books. I don’t know why that should be because I invariably enjoy his work. My copy was published by Richard Edward King and is apparently a first edition, but not worth all that much. Presumably thousands of them were printed. I had to cut a few of the pages so I suspect that I’m the first person to finish this edition. It was first published in 1819 but in its day it was a historical novel, set after King James VII had been deposed.

The story begins with the funeral of the Master of Ravenswood, he had lost his title because he had been on the Jacobite side, and after a protracted battle with a devious lawyer he has lost almost all of his property. Edgar his son and the new laird of Ravenswood is left with only a ruin to live in with a couple of old loyal family servants who would no doubt never have been able to get a job elsewhere.

Edgar despises the lawyer Sir William Ashton, seeing him as the reason for his family’s downfall, and to make matters worse Sir William is now living on the old Ravenswood family estate. While visiting his old nanny in a cottage on the estate Edgar meets Lucy Ashton and becomes infatuated with her. Their relationship develops but when Lucy’s manipulative and controlling mother learns of it she’s determined to put a stop to it.

This story has elements of lots of old tales – Romeo and Juliet being obvious but Scott used a lot of traditional Scottish Border folk tales and ballads in his books apparently. Despite this being a tragic romance there’s quite a bit of humour involved, and I really enjoyed this one.

Lucy keeps rather a low profile for most of the book but this tale seems to have been very popular in many countries and it was even made into an opera by Donizetti in 1835, based loosely on the book.

10 thoughts on “The Classics Club Spin no. 1 – The Bride of Lammermoor by Sir Walter Scott”