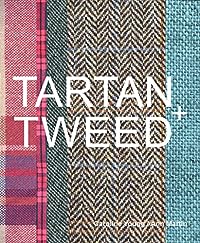 Tartan + Tweed by Caroline Young/Ann Martin is a history of the two fabrics that are traditionally linked with Scotland. It has lots of interesting photographs, some of them quite nostalgic as a fair few pop/punk/rock bands have used tartan as their stage costumes. Rod Stewart and The Bay City Rollers get a mention plus Slade’s Noddy Holder who wore a tartan suit along with a mirror embellished top hat.

I found the Tweed half of the book more interesting, simply because I learned quite a lot of things that I hadn’t known before about tweed, whereas I found the tartan section to be a bit repetitive and not as well written, also I didn’t learn anything I hadn’t known before. However if you don’t know much about the history of tartan this will be a good read for you.

As a Scot I have an awkward relationship with tartan. Most of us avoid wearing tartan except for weddings or nowadays graduations or Scotland football matches – if you’re a man. Scottish women tend to avoid it completely for fear of ending up looking like something seen on a shortbread tin. For some reason schools often have tartan skirts as part of the school uniform, even in England and everybody is glad to get out of their school uniform at last – so that’s another reason tartan isn’t popular here.

Anybody can design their own tartan so there are thousands of different designs now and I think that diminishes it, but I suppose it helps to keep the industry going. The myth that only Scotsmen can wear kilts is killed off in this book. If you fancy sashaying about in a kilt then feel free to go for it! There’s no doubt that men in kilts walk differently, the kilt almost has a life of its own it seems.

When we went to Northern Ireland for a holiday (don’t ask) we were surprised to see tartan EVERYWHERE. It seems to be used as a tribal flag by the Ulster Scots, so you could buy tartan curtains and bedding – you name it and they had it in tartan. There’s no doubt about it, human beings are strange.

As I said, I found the tweed section more interesting, I also prefer tweed to tartan and over recent years the industry has really modernised and become beloved by fashion designers. There are quite a lot of good fashion photographs, starting with Coco Chanel herself.

One really tragic fact in this book is that 635 men from the tweed making Scottish Border town of Galashiels were killed during the First World War, most of them in one attack at Gallipoli. Several of the mills ended up being bought by outsiders as many of the local mill owners had lost their sons in that attack.

There’s a section on Tartan and Royalty. From that dandy King George IV to today members of the royal family have been keen tartan wearers. I must admit that there are times when Scots find that slightly patronising. But at one point Princess Anne seemed so fond of tartan and supporting the Scottish rugby team, we thought she was making a bid for being the Queen of an independent Scotland – but that never came to pass.

Anyway, this has been a ramble and a half, suffice to say that I was so enamoured with the Tweed part of this book that when I saw a bundle of Harris Tweed at a recent vintage fair I snapped it up – but what am I going to do with it? I have no idea.