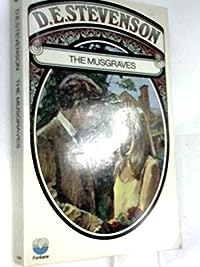 The Musgraves by D.E. Stevenson was first published in 1960. Esther and Charles Musgrave have been married for 25 years but they’re not destined to add any more years to that tally as Charles is terminally ill. He was a widower when he married Esther and is much older than her. His 17 year old son Walter reacted badly to the marriage and took off in high dudgeon to make a life for himself, cutting off all contact with his father.

All that is in the past though and it’s Esther and their three daughters that are preying on Charles’s mind in his last days. Delia the eldest daughter has always been difficult, she has never quite got over not being an only child and having to share her parents with two younger sisters. She’s a needy and dissatisfied young woman and likes everybody to know it, with the result that the other members of the family are walking on eggshells when she’s around.

Meg the middle daughter is going to be married to Bernard soon, but her mother isn’t at all happy about the match. Charles is obviously keen to get Meg settled with a steady husband, looking to the future he knows that Bernard will be a help to his family when he’s no longer around to look after them. Esther doesn’t like Bernard and is really quite a hypocrite considering her far more mismatched but successful marriage with Charles.

Rose, the youngest daughter is packed off to school and with Charles’s death and Meg’s marriage Esther is living with just Delia in the much smaller house that they’ve had to move to when it became a financial necessity to move out of their large family home. Delia isn’t happy with the change in their circumstances, living in a large house with plenty of land around it had been important for her ego and she feels the downfall keenly. Esther is delighted with the new house though, it’s just Delia’s personality that is a problem.

I enjoyed this book about difficult family dynamics and clashing personalities. It’s often the middle child in a family who is supposedly the difficult one so I’m told, but I think that quite often the eldest child comes as such a shock to some mothers, especially if they are young mothers and are an only child themselves. I’ve certainly observed some young mothers treating their eldest as if they are a sibling that they never had and not their child. By the time they have a second child they’re ready to get into mothering mode so the relationship is very different. It’s harsh on the eldest child. Perhaps that was part of Delia’s problem.

Well, as Tolstoy said: “Happy families are all alike; every unhappy family is unhappy in its own way.”

Although I prefer D.E. Stevenson’s books to have a Scottish setting (so parochial of me I know) I did enjoy this one.