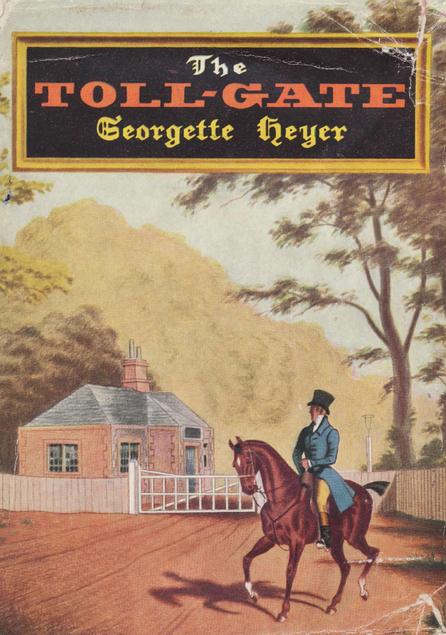 The Toll-Gate by Georgette Heyer was first published in 1955 and my copy is a Book Club hardback from that date. This is more of a mystery/adventure book and is quite light on the romance – which is fine by me.

Captain John Staples has recently left the army after the end of the Napoleonic Wars, he had a bit of a reputation for being crazy amongst his fellow officers and he’s finding civilian life a bit boring, especially when he has to go to a family wedding in Derbyshire. The women in his extended family seem keen to find a wife for him, but they’re disappointed when he leaves the wedding early.

Looking for an inn to spend the night in John – or Jack as he’s generally known to his friends – gets lost and eventually reaches a roadside toll-gate which is being ‘manned’ by Ben a young and scared boy all on his own. It transpires that Ben’s father has gone missing and Ben fears the worst. Jack decides that he must find out what is going on.

This is a good light read with likeable characters and a plethora of Regency slang.

You might think that a toll-gate dates a book immediately to a certain era but it’s only a couple of years since we had to stump up all of 40 pence in the dead of night on a rural road somewhere around the English midlands. In fact not that long ago I saw such a house and business for sale in the Guardian, you would have to be a keen home body though as you would never be able to leave the place!

6 thoughts on “The Toll-Gate by Georgette Heyer”