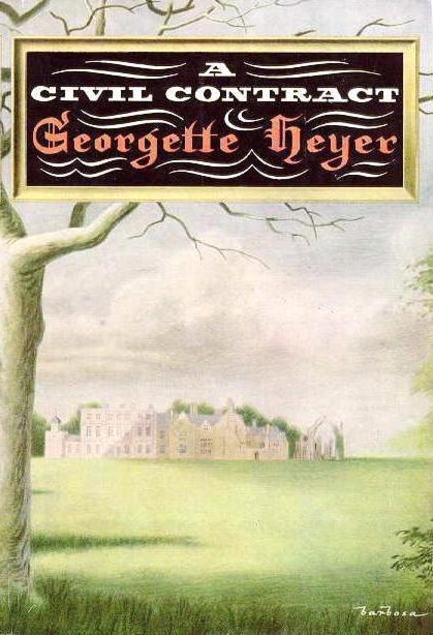 A Civil Contract by Georgette Heyer was first published in 1961 and it’s quite different from her other books as there’s really not much in the way of humour in it, no witty repartee between couples. There’s a lot of history in it, but it’s never dry. Apparently Georgette Heyer hated this book and she had a very tough time writing it. The problem was that her mother was seriously ill and in fact dying while she was writing it, so it would have been strange if she had been able to write in her normal fashion. I’d like to be able to tell her how much I enjoyed it though, in fact I think it’s my favourite so far, despite the fact that I so enjoy her more usual witty dialogue.

A Civil Contract features Adam, Lord Lynton, a young man who has only just come into his title after the death of his father. His father had been a spendthrift, womaniser and a gambler and has left nothing but debts. The only way out of the mess his father has left him with is to sell the family estate. Adam’s mother is dead against that and he isn’t keen on it himself.

Adam’s lawyer knows a way out of the problem – he suggests to Adam that he can arrange a marriage between him and the daughter of a very wealthy businessman whose ambition is for his only child to marry into the aristocracy.

So – very different from Heyer’s more usual romantic relationships and the upshot is a more realistic progress of the development of a marriage.

Sometimes music accompanies me in my mind as I read a book and with this one it was Mama Cass’s It’s Getting Better. Completely inappropriate for a Gerorgian setting I know but the sentiment is the same. It occurs to me that you have to be of a certain age to remember Mama Cass though!

8 thoughts on “A Civil Contract by Georgette Heyer”