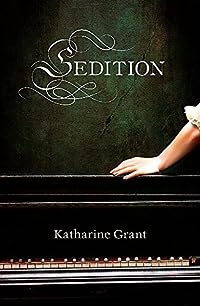 Sedition by Katharine Grant was published by Virago in 2014 and I was drawn to borrow it from the library just because of the title – Sedition – and the fact that it was set in 1794, an important date sedition wise and the year that one of my ancestors was transported for 14 years as he was found guilty of sedition. He was one of the founder members of the Society of Friends of the People who had the temerity to ask for the vote for universal franchise and the abolition of slavery.

Imagine my disappointment when this book turned out to just mention sedition in a couple of sentences. The book should really have been at least subtitled – teenage exploitation sex romp. Why Virago decided to publish it is a mystery to me. I have to say that it’s well enough written, it’s just the premise that I found so ludicrous.

Some wealthy men and their wives are desperate to marry their daughters off, preferably to the aristocracy. They plan to show off their daughters in a concert and so they hire a piano and tutor to train them up for the entertainment. However, the owner and maker of the piano didn’t want to hire that particular piano out to them and he decides to ruin the girls by paying the tutor to deflower them all.

One by one the four girls all end up having sex with him – in what they are told is the ‘French’ way, so they won’t get pregnant. Meanwhile the piano maker’s daughter and another young girl engage in lesbian fumblings.

If ever a book was written with an eye on sales I’d say this one was, but to me it was an eye-rolling waste of my time. No doubt it appeals to some people though. I started reading this one in 2018 but finished it in 2019, I just hope that the rest of my reading year is better than the beginning.

2 thoughts on “Sedition by Katharine Grant”