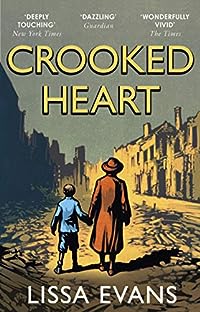 I borrowed Crooked Heart by Lissa Evans from the library as some blogger pals had enjoyed it so much and I thought that with its World War 2 setting it would be right up my street. To begin with I actually found it quite slow but when I did get into it I really enjoyed it. There are quirky characters and on the surface they seem unlikable but I ended up really appreciating them.

Noel Bostock is an unusual 10 year old, he loves books and speaks like a well-educated adult, which doesn’t endear himself to the other children in the school in St Albans that he has been evacuated to from London. His parents are dead and he’s really alone in the world. He’s billeted with Vera Sedge who is a 36 year old unmarried mother of a brat of a 19 year old son. Her mother is also part of the household, but she hasn’t spoken since Vera announced to her that she was pregnant, the shock was too much for her.

Vera is always short of money and her various nefarious schemes to get out of debt have been unsuccessful – until Noel gets involved. Vera had been lonely as she could never have a conversation with her mother, and her son wasn’t interested in her at all. When Noel begins to actually have conversations with her it’s a pleasant surprise for her, even if he’s often explaining things to her – as if he were the adult. They end up being quite a team.

I’m more used to reading books that were actually written during the war but I think this one captured the atmosphere well, particularly the amount of dodgy dealings that were going on. There used to be a myth going about that criminal activities almost disappeared during the war effort when of course the opposite is true. Often formerly honest people turned to crime. Dishonest people grabbed the new opportunities that opened up for them, and the blackout was a great help to people getting up to things under the cover of darkness.

Amongst the blurb on the back is this: ‘Spirited, quirky characters and a devilish wit… Why is Lissa Evans not one of our best-known and best-loved authors?’ Sunday Express

I’ll certainly be looking out for more books by her.