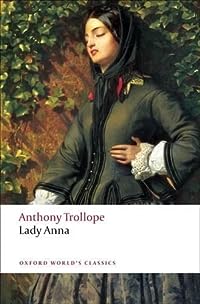 Lady Anna by Anthony Trollope was published in book form in 1874 but the setting is around 1830. Lady Anna’s mother was socially ambitious and was determined to marry into the aristocracy. Despite dire warnings, especially from her father, she insisted in marrying Earl Lovel who had a reputation for being evil. Not long after their wedding Earl Lovel told his ‘wife’ that she wasn’t actually married to him at all as he already had a wife living in Italy. Their unborn child would be illegitimate. Then he abandoned his ‘wife’ and went to live in Italy. Over the next 20 years Lady Lovel strove to prove in court that she was actually married to Lord Lovel, all that cost a lot of money that she didn’t have.

A local tailor took pity on her and ended up supporting her and her daughter, Lady Anna. The tailor had spent thousands of pounds on the Lovels, to the detriment of his own son. Meanwhile Anna has more or less been been brought up with Daniel the tailor’s son and over the years they’ve become more than friends, Anna has promised to be his wife when she’s of age. When her mother learns of this she’s horrified at the thought of her Lady Anna marrying the son of a mere tailor, despite the fact that that tailor has been supporting them both for years.

Meanwhile Lord Lovel has died intestate so his estate and money should go to his nephew who is keen to marry Anna which would please Lady Lovel, but Anna feels she must keep her promise to Daniel. Lady Anna takes this all very badly as you would expect of someone who has always been a social climber

Whose side was I on? Well, there are lots of clues to the character of Daniel and they don’t bode well for a harmonious marital future for whomever he marries. Daniel is a Radical, the variety that thinks that everyone should have equal rights, except his wife!

Daniel Thwaite was considering the injustice of the difference between ten thousand aristocrats and thirty million of people, who were for the most part ignorant and hungry.

“Mr Thwaite says, “There must be earls and countesses.””

Daniel Thwaite says, “I see no must in it. There are earls and countesses as there used to be mastodons and other senseless, overgrown brutes roaming miserable and hungry.”

Daniel Thwaite says, ” I don’t want my wife to have anything of her own before marriage, but she certainly shall have nothing after marriage – independent of me” For a man with sound views of domestic power and marital rights always choose a Radical.

I believe that Trollope wrote more books featuring these characters – it sounds like Lady Anna may discover that she has made a big mistake.