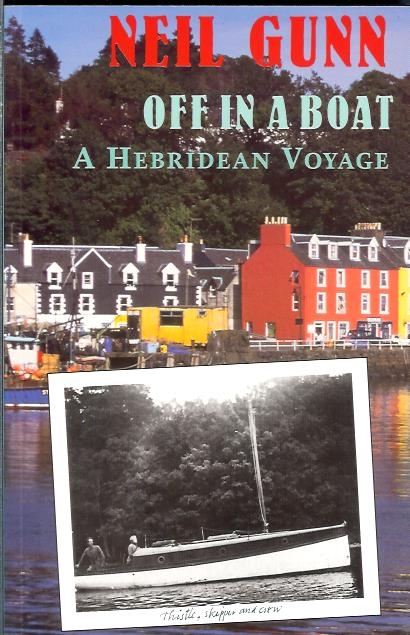 Off In a Boat by Neil Gunn is an account of the journey that he and his wife embarked on in 1937 after he decided to give up his safe job in the civil service, sold their house and bought a 27 foot wooden boat so that they could explore the Inner Hebrides. It seems that neither of them knew much about sailing but they had charts and read books before they set off. The boat that Neil Gunn bought was in need of a lot of work as it was in bits when he viewed it first but that didn’t put him off buying what was a far from ideal vessel. If you look at the book cover you’ll see that the living space must have been cramped to say the least and Gunn’s wife – affectionately known as the Crew had a hard time of it, and wore out her trouser knees as she had to crawl around so much while she did the cooking.

It could be said that the pair were foolhardy in their ambition as if the engine had stopped while in wild water they would have been toast – but they survived. Half-way through the journey they were joined by his wife’s brother who was known as the Mate and luckily he had more experience of sailing and engines although he was happier when he was able to hoist the sail and turn the engine off.

Although this book was written in 1937 I imagine that the actual journey part of it would be much the same today although the landmarks used in the navigation will be very different, but it isn’t just an account of a journey and adventure through beautiful scenery, he also incorporates Celtic and Norse legends, references Boswell and Johnson and highlights the hospitality and kindness that they experienced from the ordinary local people. Sadly the same could not be said for the rich landowners, some of whom had the delusion that they owned the sea and any fish in it and also had the right to steal oars from anyone who happened to have had the temerity to beach their rowing boat near their land. In some ways the new landlords were even worse than those who had cleared their land of crofters, forcing them to sail to America and Canada – and replacing them with more lucrative sheep.

I was unsure about this book when I bought it but I ended up enjoying it even more than Neil Gunn’s most famous novel The Silver Darlings.