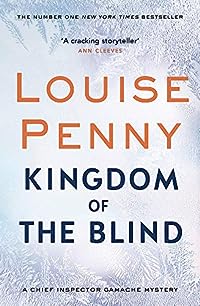 Kingdom of the Blind by Louise Penny was published in 2018 which means that I’ve caught up with this series which I think it’s important to read in the correct order. Louise Penny’s husband died before she began to write this one and she didn’t think she would be able to write after losing him, particularly as her detective Armand Gamache was modelled on her husband, but after a while she felt able to continue with the series. I suppose for her it’s one way of keeping her husband alive.

When an elderly woman – a complete stranger – names Armand as an executor to her will he’s perplexed. Myrna, a retired psychologist who is another inhabitant of the village of Three Pines is also named and a young man called Benedict who is a builder. It’s a complete mystery to all of them and when the will is read in the dilapidated home of the deceased they’re none the wiser. Bertha Baumgartner has left millions to her three children and an aristocratic title as well as property abroad. But surely nobody with that sort of money would be living in squalor as she did.

As the setting is Three Pines it wasn’t going to be long before a body turned up and so begins Gamache’s investigation, helped by his staff at the Surete de Quebec. At the same time the local politicians in Quebec seem hell bent on ruining Gamache. The stress is all too much for Jean Guy his son-in-law. As ever you’re never quite sure who the good guys are.

Despite Louise Penny’s loss she still has her sense of humour. It’s the many quirky villagers that bring so much charm to these books and Ruth Zardo with her pet duck Rosa aided by Gamache’s grandson are hilarious.

3 thoughts on “Kingdom of the Blind by Louise Penny”