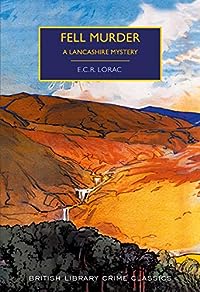 Fell Murder by E.C.R. Lorac was first published in 1944 but I borrowed a British Library Crime Classics reprint from the library. This is the first book by Lorac that I’ve read and I really enjoyed it. Lorac was the pseudonym of Edith Caroline Rivett who also wrote under the name of Carol Carnac.

The setting is during World War 2 and the north of England Lake Country, an area that the author obviously loved. Garthmere Hall is an ancient pile which is far too big for the Garth family to be able to maintain. Over the generations they must have become progressively poorer and they’re now just a hard working farming family. But they’re all ruled by their elderly father who is miserably mean and doesn’t even pay wages to his off-spring.

My favourite kind of crime fiction is the sort where a body is found almost immediately, so the fact that murder isn’t committed until page 66 should have been a problem for me, but I enjoyed the scene setting. The local police in the shape of Superintendent Layng manage to rub all of the locals up the wrong way but when Macdonald of Scotland Yard is called in his attitude to them and his obvious appreciation of the surroundings gets better results. I’m really looking forward to reading more by the author.

Although the setting is wartime there’s no rationing of food! Those in rural communities who were actually growing food did have ways and means of dodging such things. Something that Macdonald appreciated.

The cover of this book was taken from an LMS travel poster of Shap Fell and it does look a bit dull compared with some of the covers in this series, but the contents are better than many of those ones.