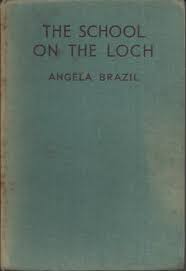 The School on the Loch by Angela Brazil was published in 1946 and it is the last book that she wrote.

The tale begins in Kenya where young sisters Ailsa and Jessie Lindsay live on their parents’ coffee farm. It’s Ailsa’s birthday and she has just been sent a book by her Uncle Tom in Scotland. The book Bonnie Scotland makes the girls wish they could go there, especially as their father has always been rather homesick for Scotland. He dreams of owning a farm back in his homeland which he was forced to leave as a youngster.

A plague of locusts devastates the coffee crop and very much changes the fortunes of the family so when a Scottish relative offers to take the girls ‘back home’ and educate them the girls are thrilled.

As you can imagine the Scottish weather is a wee bit of a shock for the girls but it isn’t long before they’re settled into life in Scotland and their new school and there’s the usual school situations involving teachers and girls.

Evidently Angela Brazil did do some local research as they visit Loch Lomond and she mentions getting the train to Dumbarton, which is of course where I grew up. I always get a bit of a thrill when it gets a mention in a book.

Angela Brazil must have been getting on when she wrote this one, it’s not her best but as ever I did learn something. I had never heard of the word prog so when I came across it in this book I looked it up in my trusty but falling apart over forty year old dictionary by my side and discovered that amongst many things it means – provisions, especially for a journey. In the book the prog was ready for their trip to Loch Lomond, another place that Angela Brazil must have visited.

3 thoughts on “The School on the Loch by Angela Brazil”