Our weather is at the stage of swinging to and fro between autumn and winter, we’ve had early morning ice – so I’m told, I wasn’t up early enough to witness that! Anyway, this all means that it’s knitting season again for me. I fancied revisiting a chunky jumper pattern that I first knitted way back when I was about 18 years old. Then I knitted the smallest size for myself, but I’m not too depressed to report that this time around I’m knitting the third size, after all, more than 40 years have passed since those days. 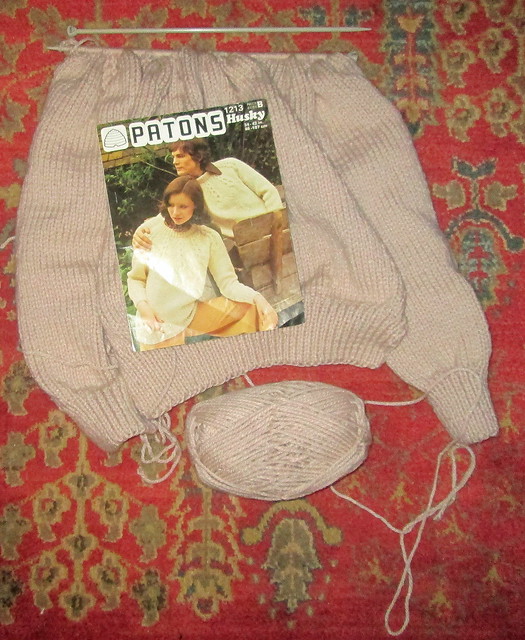 This sweater is quick to knit as the wool is chunky and the needles large. The yoke is formed by having the front and two sleeves on the needles together, that means a lot of stitches in fact 176 all at once squeezed onto one needle, obviously decreasing as the shape forms. It’s a bit of a squash and as my needles are plastic I find that the stitches don’t move as smoothly as I would like. I prefer metal knitting needles, but I don’t think they come in large sizes so I’ll probably buy some bamboo needles if I ever knit this pattern again.

When I perused the pattern before beginning I was actually quite daunted, there are 43 rows in the yoke pattern and I wondered if my ageing brain would cope with that now, but I’m glad to say I’m not having any problems – so far. However, I’m only on row 12 so fingers crossed for me please! The back yoke is sewn on last, but that should be much easier to do, far fewer stitches to cope with will make it even faster to knit up.

Is it your knitting season yet?