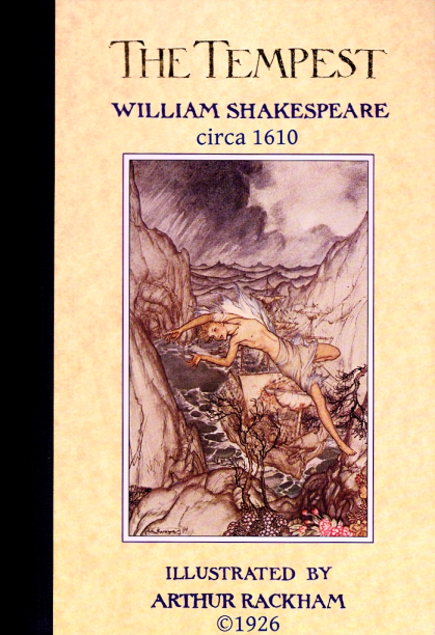 A wee bit late, but I got my Classics Club spin choice finished. I actually began reading The Tempest ages ago and got half way through it before being distracted by something else, so when I eventually got back to it I started from the beginning again. This is probably the last play that William Shakespeare wrote, way back in 1610-1611.

Prospero was the Duke of Milan but he wasn’t really interested in ruling his kingdom as he was obsessed by honing his skills as a magician. Prospero was happy to allow his younger brother Antonio to take over all the power that he should have had, but in time Antonio decided that he wanted to have his brother’s title too, so he deposed Prospero who managed to escape with his three year old daughter Miranda, helped by his trustworthy servant Gonzalo.

When the play begins twelve years have passed since Prospero and Miranda landed on an island somewhere in the Mediterranean, and Prospero has been practising his magic arts aided by the books he managed to take with him and Ariel who is a spirit, he/she had been held captive on the island by a witch who had lived there earlier along with her son Caliban. Prospero has been able to send a huge storm to blast a ship which has his treacherous brother on board, among many others, including Ferdinand who is the son of the King of Naples who was also on the ship. Ferdinand thinks he is the only survivor of the shipwreck and when he and Miranda meet it’s love at first sight. But when Prospero meets Ferdinand he sets him to work for him, hauling firewood around, that’s not something that the heir to a throne is used to doing.

Meanwhile, elsewhere on the island some of the other survivors who had been returning from a wedding are plotting to kill King Alonso, but Ariel gets wind of the plot and foils it. There’s a lot of confusion and some drunkeness among the survivors – but what can I say except – All’s well that ends well except that’s another of his plays.

That’s the thing about reading Shakespeare, you keep coming across phrases that have become part of the English language, and often you don’t realise that they were first written by Shakespeare, and of course other writers have borrowed them. The phrase – this rough magic appears a few times to which I say Step forward Mary Stewart. His words have found their way into our psyche whether we realise it or not. I expect we’ve all heard from Act 4 scene 1:

We are such stuff
As dreams are made on, and our little life
Is rounded with a sleep

It’s thought that he was inspired to write this play on hearing of what happened to a fleet of nine ships which set sail for Virginia. The ship the Sea Adventure was separated from the other ships during a storm and washed up near Bermuda, stuck between two rocks. The crew and most of the cargo and fittings managed to get ashore safely, but it was assumed that they had all perished and it was some time before they managed to continue their journey to Virginia.

Shakespeare knew some of the people involved and was able to read an original letter from William Strachey which described the strange experiences of those who had been shipwrecked.

It seems that nothing changes as I know that writers today often get their ideas from things that they see in the news.

Anyway – that’s The Tempest under my belt – so to speak. It’s a great read and I can only imagine how enthralling it must have been for the original audience and will definitely try to watch a modern version of it, but not too modern as I prefer my Shakespeare to come with period costumes and stage sets. I just love Arthur Rackham’s illustrations.

How did you get on with your Classics Club spin book?