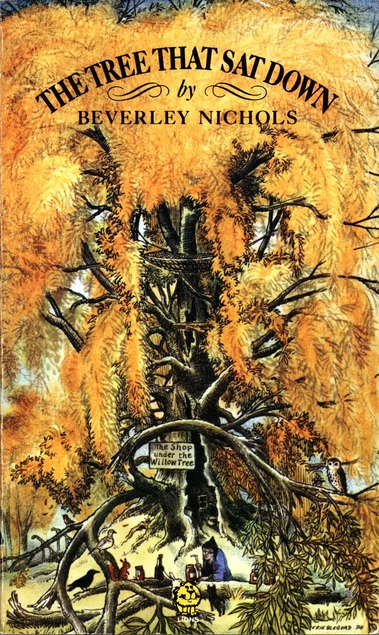 The Tree That Sat Down by Beverley Nichols was first published in 1945 and it’s the first of his books for children that I’ve read. Having said that – there are parts of this book that are probably aimed more at any adults who might read it.

Beverley Nichols describes it as ‘a fairy story and it’s a real old fashioned one, full of magic spells, wizards and transformation scenes. Maybe some of the characters have a modern touch … the witch for instance keeps a vacuum cleaner to assist her with her spells, but otherwise it joins all those other magic tales which begin once upon a time.’

The setting is a woodland where Judy and her granny have opened a shop to cater for the needs of the woodland animals – yes, it’s all very anthropomorphic. But then Sam and Old Sam open another shop nearby, with the intention of fleecing all the animals, conning them out of their money, and at the same time ruining Judy’s shop.

I enjoyed this book which is on one level a children’s fantasy tale and on another is a vehicle for the author to get some things off his chest, such as his feelings about how animals are treated by some humans, the over-commercialisation of society and mad consumerism – and his attitude to war.

Did you ever hear of such impertinence? It is an insult to the noble and peaceful family of Sheep. It is the Humans who go about in herds and don’t think for themselves! Look at the way they make War! Sheep would never be so foolish, nor would any other animal. Did you ever hear of a herd of sheep or any other animal leaving their homes and their pastures, and going off to fight say, a herd of zebras whom they’d never even met, just because some silly sheep had told them that the silly zebras wore striped coats, and that anybody who wore striped coats must be their enemy? That is exactly what Humans are doing all the time. Look at their dreadful way of waging war in the air. If I have a fight in the air it is because I am attacked. I fight for my life. But what would you think of me if I were to take a rock and fly off with it to a farmyard and just drop it into a basket of eggs.That is what Humans call “bombing”. They all do it, and they think it is wonderful, and they give medals to the Humans who break the most eggs. To me, it is all sheer folly and wickedness. I have very little hope for the Human race … very little. It will take them at least a million years to reach the level of animals … and long before then, I am afraid they will all have killed each other off.’

It’s fair to say that the previous six years of war seems to have left the author exasperated and a bit depressed I think. This is the first book in a trilogy, the other two are The Stream That Stood Still and The Mountain of Magic. I intend to get around to reading those ones – sometime.