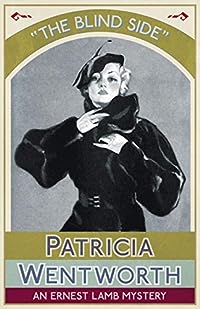 The Blind Side by Patricia Wentworth was published in 1939 and was the first of three Inspector Lamb books that she wrote. The setting is London where Ross Craddock has inherited what had been the family mansion, but years ago it had been divided up into numerous flats, some of which his father had given to other relatives to live in. But Ross is a bit of a ‘bad hat’ and when his cousin Lucy has the temerity to speak to him about his behaviour he takes the first opportunity to put her out of her flat. The elderly spinster is shocked, as are other members of the family.

When Ross comes to grief there’s no shortage of culprits and some of those under suspicion aren’t at all sure of their own movements on the fatal night.

I really liked this one. There’s plenty of tension and suspense, some very good characters, some wonderfully awful characters and Inspector Lamb and his side-kick Abbott were a nice change from Miss Silver.

I read this book on my Kindle which I hadn’t used for ages and I have no idea how I got this book although I do know that I got it free from somewhere, but it has been reissued by Dean Street Press and has a very interesting introduction. I hadn’t realised until I read it that Wentworth was of Scottish extraction although that might not have been obvious to non-Scots, however there are lots of Scottish surnames in her background. I also noticed at least twice the use of the Scots word dreep.

One thing that annoyed me though was that she used the word waked a lot when woken would have been much more literate, waked is just wrong.

2 thoughts on “The Blind Side by Patricia Wentworth”