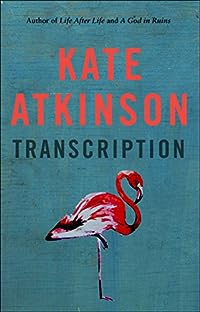 Transcription by Kate Atkinson was published in 2018, but it begins briefly in 1981 before the action moves to wartime London. Juliet is just 17 and orphaned with the death of her mother. She’s going to have to fend for herself and manages to get a job with the intelligence service MI5. It turns out not to be as exciting as that sounds as she ends up sitting at a typewriter in a room next door to one which is being used as a meeting place for Nazi sympathisers. The walls are bugged and it’s her job to type out what she hears – not as easy as you might think. No-one is to be trusted and Juliet finds herself wondering about her own colleagues. Is her boss who is supposedly posing as a Gestapo officer actually a Gestapo officer? She now has a different name and it isn’t long before she’s embroiled with the Fascists she has been listening in to and given the task of searching for The Red Book which apparently has names and addresses of Nazi sympathisers.

Fast forward to 1950 and Juliet is working for the BBC making the Schools radio programmes, but her life with MI5 comes back to haunt her, or is she just being paranoid?

I really enjoyed this one and I’ll probably give it 5 stars on Goodreads as I can’t give it 4.5. Kate Atkinson has been living in Edinburgh for donkey’s years so I count her as a Scottish author.

You can read Jack’s much more detailed thoughts on this book here.

2 thoughts on “Transcription by Kate Atkinson”