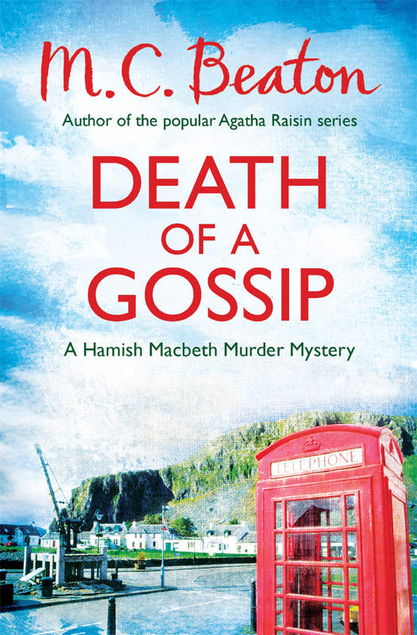 I decided to read Death of a Gossip by M.C. Beaton, in memory of the author who died a few weeks ago, it’s the first book in her Hamish Macbeth series, published in 1995.

This is quite similar to her Agatha Raisin books, but this time the murder mystery has to be solved by Hamish Macbeth who is the local Highland police constable, a bit of a lazy bones on the surface, but with the help of his many cousins who seem to live all over the world, he manages to find the culprit. I suspect that this will be a feature of all of the books. The setting is the Scottish Highlands.

The book begins with John and Heather Cartwright preparing for the arrival of their guests. They own The Lochdubh School of Casting: Salmon and Trout Fishing and are expecting a very mixed bunch of students – a 12 year old boy, a retired army major, an American couple, a London barrister, a London secretary, a debutante type and a society widow.

Very quickly the character of Hamish Macbeth is portrayed as being very lazy and a bit of a scrounger, especially where coffee and food is concerned and he seems to be a bit lacking in brain power. Of course he’s just a typical Highlander and as it turns out has plenty of native wit.

Lady Jane Winters – the society widow of a Labour peer seems determined to upset all of the other students, she’s rude and aggressive and seems to know more about them all than she should. In no time she has just about everyone wanting to kill her – or hoping that someone else does. So when she turns up dead in a loch there’s no lack of suspects.

This was quite an enjoyable very light read, but I don’t know if I’ll continue with the series although the books are the sort that are ideal reading when you don’t feel able to concentrate on anything too taxing.

There were a couple of things in it that annoyed me. The Americanism ‘collect call’ was used when of course it should have been the British ‘reverse charges’. Also Lady Jane Winters, who insists on being called Lady Jane should have been named Lady Winters as she had got her title from her husband’s peerage and hadn’t been born a Lady Jane – such as Lady Diana was. I feel sure that a Scottish woman of M.C. Beaton’s vintage would have known this although many people nowadays don’t seem to understand the difference.

4 thoughts on “Death of a Gossip by M.C. Beaton”