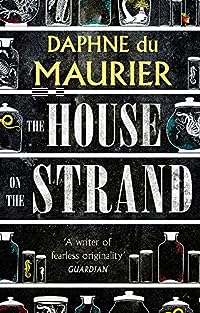 I had a feeling that I might have read The House on the Strand by Daphne du Maurier way back in the early 1970s. It was first published in 1969, but I definitely hadn’t read it before. The reason I wanted to read it is that a couple of weeks ago I caught the back end of a programme which mentioned that many readers said that Rebecca was their favourite du Maurier book, but older readers tended to plump for The House ion the Strand. I enjoyed this one but although it’s years since I read Rebecca I think I still prefer that one.

This is a time shift tale with the action split between the late 1960s and 1332, the setting is of course Cornwall.

Dick is married to an American widow who has two young sons, but at the beginning of the book he is on his own, waiting for his family to arrive at the house which has been loaned to them by his friend Magnus. Magnus is a professor, a scientist who has a laboratory in the basement of the house. Dick’s relationship with his wife Vita is a difficult one, not helped by Magunus’s attitude to his marriage.

Magnus asks Dick to be a guinea pig, helping in research he has been carrying out. It means that Dick has to take some liquid and report to Magnus what effects it has on him. For Dick the effects are amazing, he’s whisked back to 1332, where he can see what is going on in the area around the house he is living in. Although there seems to be no evidence of buildings which existed it seems that there was a lot going on. There was a priory and large farmhouses and Dick is a witness to murders and intrigue, without being able to do anything about them. When the effects of the liquid wear off he’s violently ill, but is unable to stop himself from repeating the experiment, wanting to find out what happens to the people who he is convinced used to live in the neighbourhood.

When Vita and the boys arrive it isn’t so easy for him to find time to take the liquid, and his behaviour causes problems with Vita

Actually it was the contemporary part of the book which didn’t ring quite true for me, mainly because I couldn’t believe in the relationship between Dick and Vita. He supposedly loved her but it seemed to be a sort of love/dislike thing and I must admit that there didn’t seem to be much to like about her.

I intend to read all of her books and only have a few still to read I think. So far I have enjoyed The King’s General most – apart from Rebecca. This book did make me think that I would like to read more about the history of the 14th century – and wouldn’t you know it – this did feature the Black Death!