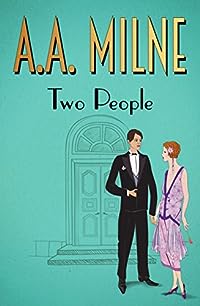 A.A. Milne is obviously best known as the author of the Winnie the Pooh books which are beloved by people of all ages, but he also wrote quite a few books which were aimed at adult readers. This one was first published in 1931.

Two People must be the most autobiographical of his novels. Reginald Willard is wealthy enough not to have to work and he leads a perfect life, has a beautiful young wife Sylvia and a lovely home in the country. He adores his wife but when he tells her that he has just finished writing a book he’s understandably quite surprised by her lack of interest in it, she doesn’t even want to read Bindweed and says she’ll leave it until it is published. That seems unlikely to happen as far as Reginald is concerned, but Bindweed does find a publisher and the book becomes the must buy of the season, it’s wildly popular although nobody seems to have actually read it, it’s talked of everywhere.

Reginald is increasingly aware that his wife and he don’t share many things in common and her friends aren’t the sort of people that he wants to socialise with. He seems to be under the impression that Sylvia is a bit of an air-head, and is surprised when others find her interesting and amusing.

They decide to move to London for a while, but this just makes it more obvious that they don’t have much in common and Reginald seems to resent the fact that Sylvia makes a lot of friends of her own, males included.

I enjoyed the London based half of this book most, mainly because more interesting and amusing characters were introduced. It was an enjoyable read.