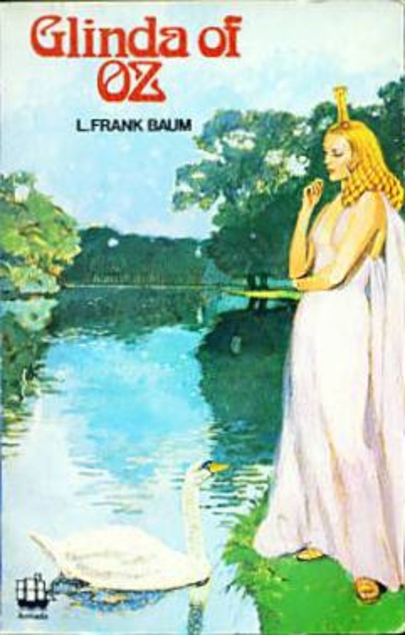 Glinda of Oz by L. Frank Baum is my first choice for the 1920 Club hosted by Simon at Stuck in a Book and Karen at Kaggsy’s Bookish Ramblings

I bought this book years ago but hadn’t got around to reading it before now. I had been under the impression that this was the only sequel to The Wizard of Oz so was very surprised to discover that this is number 14 in the series and there are also a few short story compilations too.

In this one, two of the tribes who inhabit the land of Oz are at loggerheads. The Skeezers are led by Queen Coo-ee-oh who is incredibly supercilious and a tyrant, her people are afraid of her but as she rules by magic they’re unable to do anything about her behaviour.

The Flatheads are furious because Queen Coo-ee-oh turned their queen into a Golden Pig and there’s nothing they can do about it. When Dorothy and Princess Ozma discover what is going on they’re determined to help the situation, but its some time before all of the magic that Coo-ee-oh has performed can be undone. It’s made more difficult because Coo-ee-oh has been turned into a swan and is so enamoured of herself that all she can do is admire her reflection in the lake. Princess Ozma has to ask for Glinda’s help.

This was a lovely light read, just right for the moment. It’s another journey involving a Cowardly Lion, Scarecrow, a Patchwork Girl and various others, but I feel that the book has a serious side, presented in a light manner. The lesson being that war is to be avoided if at all possible, something that I’m sure a lot of people felt just two years after the end of World War 1.