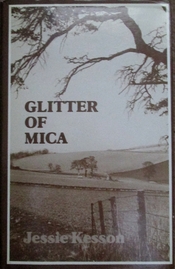 Glitter of Mica by the Scottish author Jessie Kesson was first published in 1963. Previously I’ve read Another Time Another Place and The White Bird Passes and I enjoyed those ones but I didn’t like this one nearly as much.

The setting is rural Aberdeenshire in the north-east of Scotland, the parish of Caldwell and the book begins in the 1930s. Hugh Riddell is a farm worker who is never kept on after his year of contracted work is up, which means that every year he has to find a new job in the area at a different farm. His wife is sick fed up with the constant moving, she can’t even plant a garden as she would be working for whoever would take over the tied house that goes with the farm work. They had a son, also Hugh and it’s his family that this book is mainly involved with.

The marriage of Hugh and his wife Isa isn’t any more successful than that of his parents, Hugh despises Isa and she seems afraid of him, they did manage to produce a daughter though, Helen does well at school and goes to university, but her mother is disappointed that she is only doing a diploma in social sciences and won’t come back with the MA that past ‘scholars’ have attained.

Helen gets work as a youth worker and unknown to her father starts a relationship with Charlie Anson, someone else that Hugh despises. As you can imagine it all ends in tears.

There are some flashes of humour in this book such as ….for she was a tight woman and had she been a ghost she would have grudged giving you a fright.

The characters in this book remind me, if I ever needed to be reminded of why I am ‘pining for the west’ as they are almost all miserable and mean spirited and are their own worst enemies. Love doesn’t seem to enter into anyone’s life, people get married because they have to marry someone and quickly go right off them it seems. There’s only one character who seems to have any human warmth – and she’s the talk of the place – being a wee bit too friendly with some of the local men. But the women have to admit that she always hangs out a ‘bonnie white washing.’ High praise indeed among the women.

This is supposedly Jessie Kesson’s best book but I just found it too depressing, I have no doubts that it is a very true portrait of the area and the times. Some readers wallow in misery, but it’s not for me

You can read what Jack thought of the book here.