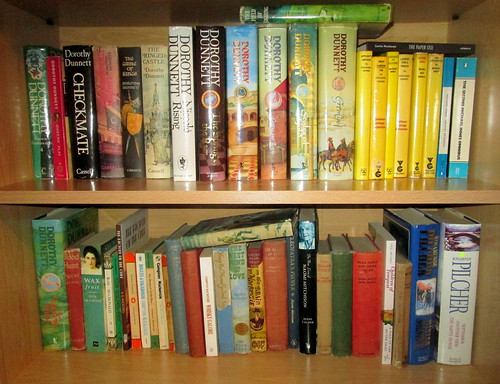 It’s Bookshelf Travelling in Insane Times again which is hosted by Judith at Reading in the Wilderness. Click on the photo to enlarge it.

Again I’m travelling along some shelves of my books by Scottish authors.

Dorothy Dunnett‘s Spring of the Ram is the second book in her Niccolo series and I should be reading that one soonish although it doesn’t appear in my 20 Books of Summer list – silly me. Dunnett’s books are dense and maybe not the best for bedtime reading, for one thing they are quite hefty, they’re definitely not for bath time reading, that’s just something that I can never do anyway. Just think – if Archimedes hadn’t been having a nice thoughtful laze in his bath and had been reading instead then he would never have had his EUREKA moment.

I’m always in a bit of a quandary as to where I should shelve books, would Michael Innes be happier living among a shelf full of crime fiction, or is he more comfortable with fellow Scots? Anyway, it’s quite a while since I read any of his books and although I enjoy his writing I prefer the books that he wrote under the name J.I.M. Stewart which usually feature life in an Oxford college and were obviously inspired by his life as a lecturer. I decided to put his Gollancz books here and his paperback crime Penguins are together with the rest of the green Penguins.

I have quite a few books by Compton Mackenzie who was actually English but at some point he did some research into his family tree and discovering that he had Scots blood in his background he seized on that with relish and became more Scots than the actual Scots, buying an island, wearing a kilt and immersing himself in the culture as much as he could. I particularly love his wartime books set on fictional islands which had been transformed from their usual quiet abodes to places that were heaving with soldiers, sailors and airmen – much to the delight of the local female population. Keep the Home Guard Turning is hilarious, very much in the style of Dad’s Army, but years before that long running TV series was thought of.

Are you a fan of any of the authors on these shelves?