It’s that time again – Bookshelf Travelling in Insane Times – how quickly it comes around! It’s a meme hosted by Judith at Reader in the Wilderness.

This week Jack and I are sharing shelves as some of the books are mine and I haven’t got around to taking photos of shelves this week, do not ask me what I have been doing as I can’t tell you, so much time at home and I’m not doing much except reading.

I’m the Gore Vidal fan. I went through a phase of reading everything of his that I could get a hold of some ten or fifteen years ago. I love his American historical novels, they may not be so well-beloved in the US, his view of the history won’t match up with many peoples’ thoughts – but I suspect that he knew what he was writing about. His Burr is a favourite of mine and I really should re-read it some time. 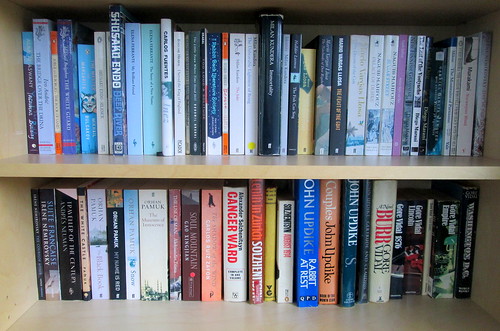 Another American writer I binge read I think in the early 1980s was John Updike, particularly his Rabbit books. I seem to remember that Judith mentioned a while back in a blogpost that she really couldn’t stand his books, I think because she lived through those times and attitudes, but it was all new to me.

Back in the early 1970s the Russian author and dissident Alexander Solzhenitsyn was in the news a lot. He had been in prison and was eventually exiled within the Soviet Union. A KGB attempt on his life failed so eventually they allowed him to move to the west – if any country was willing to have him. The USA stepped forward. However he wasn’t there long when he began to complain about life in the west. He was looking for perfection I suppose! I wanted to know what his writing was like so I read Cancer Ward which was about his experiences of having cancer and his treatment in Tashkent in the 1950s, my copy was published in 1975 and I read it that year. Looking back it seems like a strange choice of book for a 15 or 16 year old to read, but I read it and was impressed. My gran had recently died of cancer so that might have been my reason for reading it. I was just amazed that he had survived. So I went on to read The Gulag Archipelago about his experiences in Soviet labour camps. That book seems to have gone missing, maybe it’s in the garage. 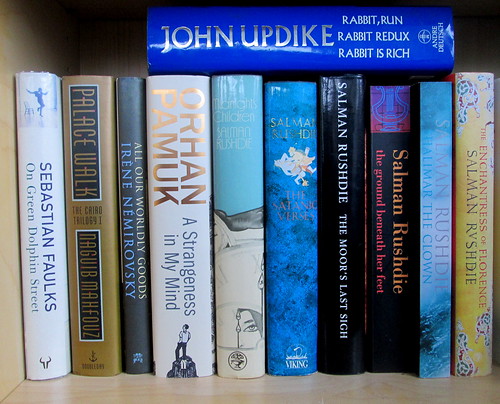 I’ve read all of the Irene Nemirovsky books, and others from the library, she was a talented Jewish writer who didn’t manage to escape from the Nazis and died in a camp, despite the fact that her own mother was partying in Paris with the high status Nazis there. She didn’t lift a finger to help her daughter.