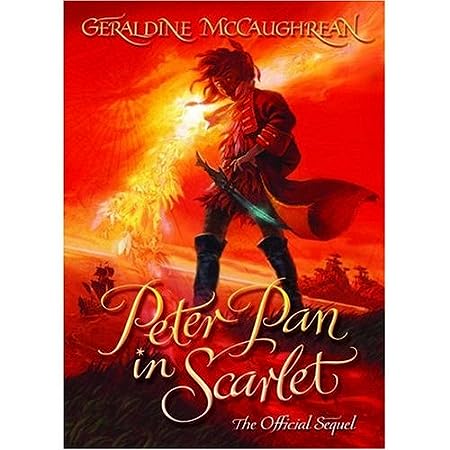 Peter Pan in Scarlet by Geraldine McCaughrean is the official sequel to J.M. Barrie’s Peter Pan which was commissioned by Great Ormond Street Hospital. Barrie gave all the royalties for Peter Pan to the famous children’s hospital. There was a competition to see who would get the contract to write the sequel and McCaughrean won it, I feel that this might have something to do with the several one star so-called reviews of the book on Goodreads have possibly been posted by some who had hoped to win the chance to write the sequel. I cannot think of any other reason for them, and the posts just show up the reviewers as being ignorant. I doubt if they have ever read the actual original Peter Pan book and possibly have been no closer to it than the Disney animation and so have no notion of how well McCaughrean captured Barrie’s writing style.

As a bit of a J.M.Barrie fan I feel sure that he would have been absolutely thrilled with this sequel, the author has a fabulous imagination so it’s a very witty and entertaining read and beautifully written. The detractors obviously have no idea of the history behind Peter Pan, how Barrie based the Darling children on the Llewelyn Davies boys that he had befriended along with their parents. Michael was killed in the First World War and so he is missing from the cast in this book, and even that was well dealt with, but that horrified the one star ‘reviewers’.

All over parts of London ‘old boys’ who had been in Neverland are having vivid dreams about the place. They are adults now and have responsible careers and frequent a London club, one is even a judge. But Neverland is calling them and Mrs Wendy encourages them, so the old boys agree that on Saturday, 5th of June they’ll go to Neverland, it’s pencilled into their diaries, they just have to find some fairy dust so they can fly again. The Old Boys set off for Kensington Gardens with butterfly nets, intent on catching some fairies.

Of course they do get back to Neverland and Peter Pan, and so begins an adventure to rival Barrie’s. I don’t want to say too much about the story but it involves pirates, a strange ravelling wool man, thousands of fairies who have taken sides in a pointless war – are you red or are you blue?

This book is smart and witty and it was lovely to re-visit Neverland again and the old characters.

I hate to think that it might be dodged by future readers because of some ignorant reviews online. One reviewer was so incensed because of the way the First Nation people are referred to in the book. Such words as papoose, squaw and Red-Indian are used in this book. SO WHAT! When I read that nonsense I was fizzing mad. If people are so upset by the use of words that have now been deemed to be outdated then I would be more impressed if they actually did something to help the plight of the First Nation people who are in dire straits today, and in need of being treated like human beings instead of people being ‘upset’ by the use of anachronistic words in 2020 when a book is set in the 1920s-30s. Of course the use of the words is totally in keeping with the times that this book was set in. There are so many people trawling the net looking for reasons to pull someone apart and just showing themselves up as idiots.

I was lucky enough to be able to buy a signed edition of Peter Pan in Scarlet. This was the third book from my 20 Books of Summer list.

One by one, the individual flecks of colour separated and floated down, like rose petals at the end of summer. They brushed the upturned faces; settled on their shoulders. More and more fell: a light snow of flaking colour. Like snow it mesmerized them – a dizzying downward whirl of prettiness. Instead of spray from the waterfall they could feel only the soft touch of a thousand thousand fragments of loveliness. It piled up in their hair; it filled their ears and pockets; it tugged on their clothing. Tugged?

Sorry this was a bit of a rant. But….

This was book 3 from my 20 Books of Summer list