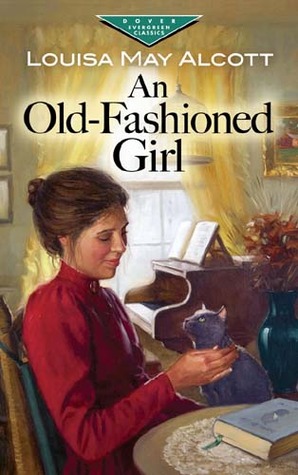 An Old-Fashioned Girl by Louisa May Alcott was first published in 1870, but six chapters had been published in a magazine the previous year.

It’s the story of Polly who is the teenage daughter of a rural church minister and his wise and sensible wife, money in that family isn’t plentiful, so when Polly travels to Boston to visit her friend Fanny she finds herself in a situation she hasn’t been in before. Fanny’s family is a wealthy one, living in a grand house with servants. Material things are obviously very important to them, but when compared with Polly’s family and upbringing Polly can see that the money and easy life hasn’t made Fanny’s family happy. In particular Fanny’s mother is immature and lacking in any common-sense, her children are argumentative and spoiled spendthrifts. Fanny’s father sees Polly’s kindness and warmth as being a good influence on his family, but really he’s just a provider of money as far as they’re concerned. Fanny’s mother reminded me in some ways of Mrs Bennet in Pride and Prejudice, she shrieks and takes to her bed when she gets bad news and evidently only married her husband for his money.

This book covers several years, taking Polly and Fanny into their early 20s. Polly is determined to be independent, she’s working as a music teacher to help her brother get through college financially. Teaching small children turns out to be much more difficult than she thought it would be. There’s romance of course and it’s quite obvious how things will end up for Polly. She’s determined to marry someone that she loves rather than ‘an establishment’. I thought of Lizzie Bennet and Pemberley!

This was an enjoyable read, I know that if I had read this book when I was a youngster I would really have identified with Polly, and not being a wild consumerist or interested in designer labels, make-up and nail bars I still do identify with her really. I found this book to be a bit too preachy and just a wee bit too sentimental, but that was the fashion of the time. I don’t think there’s a sequel to it, which is a shame, I would have liked to read more about Polly as she aged.

Thanks for sending me this one Jennifer.

I read this one for 20 Books of Summer.