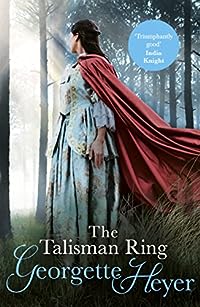 The Talisman Ring by Georgette Heyer was first published in 1936. This book doesn’t feature on my 20 Books of Summer list but I really needed a book to cheer me up. The news pandemical and political is bad enough, but the days and days of constant rain just about pushed me over the edge. I knew that a Georgette Heyer book would hit the spot, accompanied by some chocolate of course. I recalled that someone recently said that The Talisman Ring was her favourite Heyer – and it was sitting unread on my Heyer shelf – such luck! I think it has become my favourite too. More than any others it seemed to be a Regency version of one of Heyer’s crime/mystery books and there was plenty of scope for snappy and witty dialogue between the male and female characters.

The elderly Lord Lavenham is dying and three of his grandchildren have gathered at Lavenham Court. Ludovic the heir to the estate is absent as he has had to skip the country after he was suspected of murdering a fellow gambler. Lord Lavenham makes Tristram promise to marry his much younger cousin Eustacie as there’s no one to look after her, her branch of the family had recently come to grief in the French Revolution, but neither of them are attracted to each other. Basil or Beau as he is nicknamed will inherit the estate in the absence of Ludovic.

Eustacie believes that she would have a more exciting life if she became a governess (maybe French governesses have an exciting life!) so when her grandfather dies she sneaks out of the Court to ride to London, having to ride through a notoriously haunted forest. Instead of meeting the Headless Horseman she bumps into a group of smugglers, one of whom turns out to be Ludovic.

Events lead them to have to put up at a nearby coaching inn and so begins an adventurous romp with Eustacie being enthusiastically aided by Sarah Thane who is staying there while her brother Sir Hugh samples as much of the liquor in the cellar as he can get his hands on.

This book has great characters and a good plot too, it was just what I needed, mind you I’m still fed up with all the rain.

14 thoughts on “The Talisman Ring by Georgette Heyer”