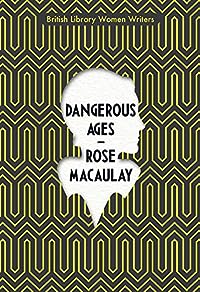 Dangerous Ages by Rose Macaulay was first published in 1921 but I read a British Library Women Writers reprint. It’s quite different from the other two books I’ve read by the author – The Towers of Trebizond and The World My Wilderness. I really enjoyed this one too, but it couldn’t be called a comfort read.

The story features four generations of women within one family and it begins with Neville’s 43rd birthday. Neville is actually a woman which is slightly confusing to begin with, her son is called Kay which is of course normally a girls name – apart from in Scandinavia. Birthdays can be depressing and Neville looks back on her life. Now that her son and daughter are grown up she is regretting that she had given up her medical studies to get married. Maybe if she resumes her studies after 20 odd years she would would regain the confidence that she had had back then. Neville is worried that she’s beginning to turn into her mother (Mrs Hilary).

‘I don’t like being merely a married woman. Rodney isn’t merely a married man, after all … But anyhow, I’ll find something to amuse my old age, even if I can’t work. I’ll play patience or croquet or piano or all three, and I’ll go to theatres and picture shows and concerts and meetings in the Albert Hall. Mother doesn’t do any of those things. And she is so unhappy so often’

Mrs Hilary who is 63 years old has always been consumed with self-pity, but since her husband’s death she has got worse. Her family is well used to her self-centred moods and silliness, especially her own mother who is 83 and obviously knows her best and has put up with her for so long. She had tried to interest her daughter in parish works, art or handiworks to no avail, with the result that when her children became adults she had nothing to fall back on. She doesn’t even like her children to communicate with each other or with their grandmother without her being there. As Freud and psychology in general has become fashionable Mrs Hilary decides that she might feel better if she sees one. It’s exactly what she wants, someone who will sit and listen to all her moaning.

‘Grandmamma’ is the happiest member of the family, she has attained contentment as many do when they have reached a great age and outlived so many acquaintances. Hearing a distant Salvation Army band playing a jolly tune in the distance is enough to make her happy – just don’t think of the rather violent words that go with the tune.

But it’s Gerda who at 20 is the youngest woman in the family who is going to cause grief within the wider family as Gerda has been spoiled and it looks to me like she’s the one who will turn into a self-pitying updated version of her granny Mrs Hilary.

This makes it all sound rather grim and as I said earlier it isn’t a comfort read, there’s a lot of angst, but such is life. This book was written just after the First World War which was a time when women of all ages and classes had been ‘doing their bit’ for the war effort, whether it was knitting balaclavas or making munitions. At the end of the war when the surviving men returned, going back to the way things had been pre-war must have been a difficult transition for all concerned, historically the suicide rates for women were very high, gas ovens were such handy things and many stuck their heads in them, right up into the 1950s. Being able to work outside the home went a long way to improving their mental health and I suppose anti-depressants helped too!

Anyway, this is a really good read. My thanks to the British Library who kindly sent me a copy of this book to review. I was really pleased to see that the Afterword is by Simon of Stuck in a Book.