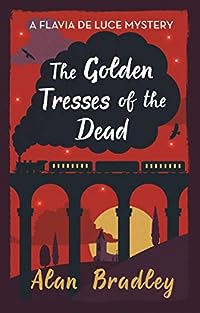 The Golden Tresses of the Dead by Alan Bradley is the tenth book in his Flavia de Luce series and it was published in 2019. It’s a really enjoyable read, a good mystery well written with plenty of humour mainly via the twelve year old Flavia who is such an appealing character, it’s just lovely to be in her company again. The setting is 1950s England.

The story begins with Flavia’s sister Ophelia’s (Feely) wedding where there’s a surprising addition to the wedding cake which kicks off an investigation for Flavia and Dogger, her late father’s valet who had been a Japanese prisoner of war. They’ve set up a detective agency and there’s plenty of scope for Flavia to use her chemistry skills in this tale.

It’s a mystery, so I can’t say too much about it. Flavia’s older sisters don’t feature much in this one and those gaps have been filled by their young cousin Undine who seems to be keen to follow in her cousin’s sleuthing footsteps, and Colin whom she meets through Mrs Richardson, the unusual wife of the vicar.

The title phrase “The golden tresses of the dead” appears in Shakespeare’s Sonnet 68 which you can read here. Alan Bradley’s Flavia de Luce series titles are mainly phrases taken from Shakespeare, Tennyson, Andrew Marvell and others. My favourite of his titles is As Chimney Sweepers Come to Dust which you can read here which comes from Shakespeare’s Cymbeline. When I first read that line I didn’t realise that in some places dandelion ‘clocks’ as they’re generally called nowadays in the UK were called ‘chimney sweepers’ in Shakespeare’s time, when you know that it makes more sense.