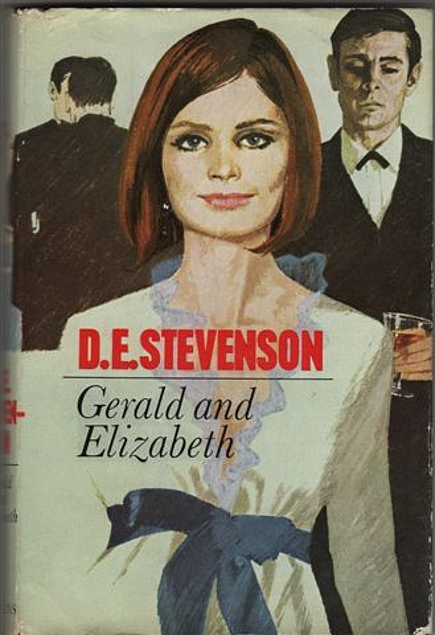 Gerald and Elizabeth by D.E. Stevenson was first published in 1969 and I really enjoyed it, up until page 188, then I got a shock.

Gerald Burleigh-Brown is on a ship, on his way home from South Africa where he had been working as an electrical engineer at a diamond mine. He left under a very dark cloud, without any references as he had been accused of attempting to steal uncut diamonds and as you can imagine he was very depressed about his future. He was going to London to look for work, but his half-sister Elizabeth has become very successful on the stage and Gerald doesn’t want to contact her, he’s too embarrassed about his situation and is worried that it would somehow harm Elizabeth’s career if anyone found out about the accusation.

But Eliabeth spots Gerald in the audience one night and is determined to keep in contact with him. She has a problem of her own. She’s in love with a wealthy shipbuilder. Sir Walter owns a shipyard in Glasgow and he’s keen to marry Elizabeth, but she is sure that there is a strain of mental instability in her family and refuses to marry him. Of course Gerald manages to sort it all out.

There’s quite a bit of travelling from London up to Glasgow and then on to the Scottish Highlands involved in the storyline and it’s all very scenic, especially if you know the areas mentioned, but for me it was ruined by D.E. Stevenson’s anti-semitic attitude. When Gerald is looking for a gift he visits an antiques shop in Glasgow.

The bell jangled as he opened the door and an elderly man with a hooky nose emerged from the back premises. I was surprised by the mention of a hooky nose and I thought ‘surely not’. Then Gerald is annoyed when the dealer refuses to accept a cheque as he doesn’t know him and he has lost money before that way. This is before bank cards of course. Gerald wants him to make enquiries at the bank.

“I’ve no time for that,” replied the little Jew nastily. You’d better go to the bank yourself and come back with the money.” He had been turning Gerald’s cheque over and over in his dirty hands; now he handed it back.

Honestly I was absolutely gobsmacked, and mortified that any other readers might think that that sort of attitude was normal in Scotland, especially considering that Gerald is portrayed as a decent chap all the way through the book. I can assure you I’ve never heard anything like that. I was ten years old in 1969, but that sort of attitude to Jews seems to me to be medieval. As Robert Burns said a couple of hundred years earlier, “A man’s a man for a’ that.”

I’m also wondering why an editor didn’t strike it out? Days later my heid is still birlin’ just thinking about it. Up until page 188 this was a good read. It was her penultimate book with House of the Deer published in 1970 being her last so maybe she was going a bit odd in the head in her old age, she died in 1973.

4 thoughts on “Gerald and Elizabeth by D.E. Stevenson”