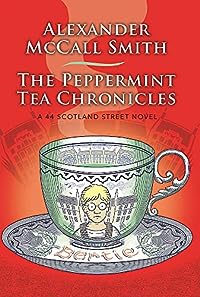 The Peppermint Tea Chronicles by Alexander McCall Smith was published in 2019 and it’s the latest in the 44 Scotland Street series.

This was an enjoyable read, perfect really for bedtime reading as the chapters are very short so if you suddenly get tired it isn’t far to the end of the chapter.

At the end of the last book the ghastly Irene decided to do a PhD at Aberdeen University, leaving her husband Stuart to look after their son Bertie and Ulysses who isn’t Stuart’s son, although Irene doesn’t know that we all know that! Everyone is glad to see the back of her. It’s obvious to Stuart that Irene will be continuing her relationship with the fellow psychologist and father of Ulysses in Aberdeen, so he feels that it’s the end of the marriage, even although Irene seems to think that Stuart is still very much hers to use and abuse. Will he have the guts to break free completely?

Bertie’s life has become more varied as his mother isn’t there to plan out all of his waking hours with psychology appointments and things he doesn’t want to do.

Big Lou, owner of the coffee shop discovers that having a child in her life has very much complicated matters.

Elspeth’s life out in the sticks, with a beautiful house and no money worries looks idyllic, but she’s bored stiff. I would tell her that she should try looking after her triplets herself, but I doubt if that would appeal to her!

Anyway, these books are humorous but also feature small ethical dilemmas. Not all of the characters work well for me, but probably everyone has their own favourites and might be different from mine. For me as ever it was pleasant to be in Edinburgh and the surroundings again, at a time when I haven’t been allowed to travel the 30 miles into the city from my place.

6 thoughts on “The Peppermint Tea Chronicles by Alexander McCall Smith”