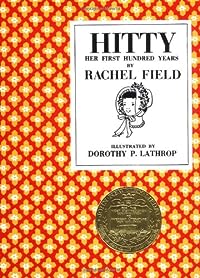 I was very surprised to receive a copy of HITTY Her first hundred years by Rachel Field as an unexpected gift from Wilhelmina an online friend from the D.E. Stevenson website. I must admit I had never even heard of the book but it was a very enjoyable comfort read, perfect for these pandemic times. The book was first published in 1929, is illustrated by Dorothy P. Lathrop and it won the John Newbery Medal.

Hitty is a wee wooden doll with peg joints, made out of a piece of mountain ash – or rowan as we call it in Scotland – a kind of wood which is magical as it keeps witches away, so she feels special, she’s only six and a half inches tall. It begins with Hitty sitting in an antique shop with a cat for company and she goes through her past life recounting the many adventures that she’s had along the way, and there are many. It seems that some of her little owners weren’t all that careful with her. She begins her family life with the Prebles of Maine where she’s given to seven year old Phoebe, it’s a very happy home but the sea-faring father needs a cook before he can take his ship to sea again and his wife has to step up and do the job, which means that the children go to sea too, including Hitty.

She’s shipwrecked, abducted by crows, stuffed down the back of a sofa, falls out of a car – you name it and it happened to Hitty – or just about. Almost every adventure ends up in a change of family for her where she experiences spoiled wealthy children and poor families, she goes up and down in society and also goes in and out of fashion. This is an entertaining memoir which also follows the changes in society over 100 years.

Thanks for sending me this one Wilhelmina.

8 thoughts on “HITTY Her first hundred years by Rachel Field”