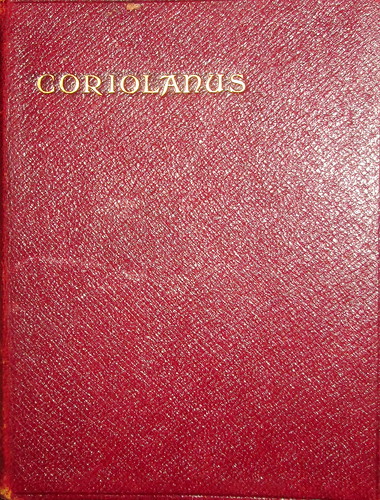 In 2020 I didn’t read many books from my Classics Club list (2), in fact it was only the spin books that I read, so this year I thought I would start to chip away at the fewer than 20 that I have left to read from my second list of 50 classic books. So I decided to read Coriolanus by William Shakespeare which I knew nothing about. I picked it up a few hours after watching the insurgents live on CNN as they beat their way into the US Capitol building and it felt just a wee bit spooky with
Act First Scene 1 Rome. A street. Enter a company of mutinous Citizens, with staves, clubs and other weapons.Then they proceeded to march on The Capitol!

Those plebeians – the common people – were revolting over a lack of affordable grain, people were starving while others hoarded grain and made huge profits.

Caius Marcius (Martius) is a top officer in the army and he is absolutely full of himself, according to him he has saved Rome countless times over the years. His mother Volumnia is ambitious for her son and wants him to become a consul, but Marcius really despises the ordinary Romans and doesn’t hide the fact so he’s very unpopular with the citizens. Marcius tells the rioters that they don’t deserve any bread as they’ve never given any service in the army. He’s incensed when two of the rioters are rewarded with seats in the Senate.

News of a war having broken out with the neighbouring Volscians means that Marcius leaves to lead the Roman army in battle. When Marcius wins the war and news comes of his many brave deeds he’s given the title of Coriolanus after the town of Corioloni.

When back in Rome Coriolanus is encouraged to become a consul, but he needs to curry favour with the people which means he has to feign humility, he tries but his real character asserts itself and the upshot is that he is banished from Rome altogether.

In his fury Coriolanus teams up with his old enemy Tullus Aufidius of the Volscians and together they march on Rome. While Coriolanus and Aufidius are camped outside the city walls the Romans are in a panic, as is the army, and two of Coriolanus’s old friends go outside the walls to plead for mercy – to no avail. But when his mother Volumnia pleads with him to make peace he relents. This treachery infuriates Aufidius and Coriolanus can’t stop himself, he’s still bragging about how many people he has killed, which isn’t at all sensible as he’s in the company of a lot of Volscians – the relatives of the people he had killed. It doesn’t end well for Coriolanus!

And so another Shakespeare play bites the dust in these strange times, and there were some even stranger parallels between the two Capitols of Rome and Washington. The boasting and arrogant character of Coriolanus is very reminiscent of Trump, but that’s as far as the similarities go as Trump could never be called brave and at bottom he seems to have despised people who didn’t dodge the army which is the opposite of Coriolanus’s attitude.

My copy of this book is a very old leather bound one with no publication date, but it is inscribed, May N Haxton 25/12/06, so presumably it was a Christmas gift in 1906.

12 thoughts on “Coriolanus by William Shakespeare”