In January 2020 we had our last UK road trip, just before Covid arrived, the weather was mild so we went to the north of England to visit friends there. Maureen took us to St Peter’s Church in Monkwearmouth which we would never have found on our own. I do love old churches, despite not being at all religious. It’s the links to the past that I love. This area was home to the Venerable Bede and Saint Benedict, there was a large monastery on the site in the 7th century. 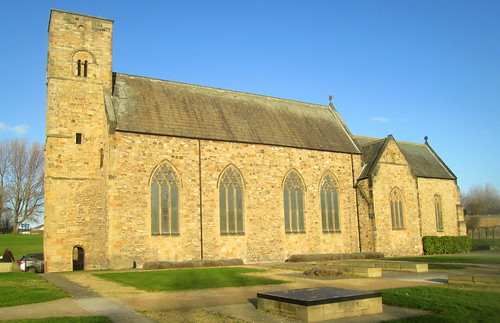 While we were there we met a very old lady who had been married in the church over 70 years previously, she was very pleased to see that it didn’t seem to have changed at all. As it happens our friend Maureen had had her husband’s funeral in the church 50 years previously, he died very young, but we didn’t mention that to the old ‘bride’ in case it spoiled her day.

We got a tour of the place with a knowledgable guide who mentioned that the Scots had set fire to the church. I don’t think he held it against us! It was King Malcolm Canmore who did that. He was born in 1031. The original church was built around 674, parts of it date from the 13th century but as usually happend with these old churches the Victorians extended it. If you want to see more photos hop over to Jack’s blogpost.