Spring has definitely sprung in Fife, not that you would kow it from this photo, I think a new camera is required, or maybe it would be better if I used my phone. Anyway there are various primulas, snowdrops, heathers in flower, but they look very ‘peely wally’ in the photo, that’s a Scottish phrase meaning pale. 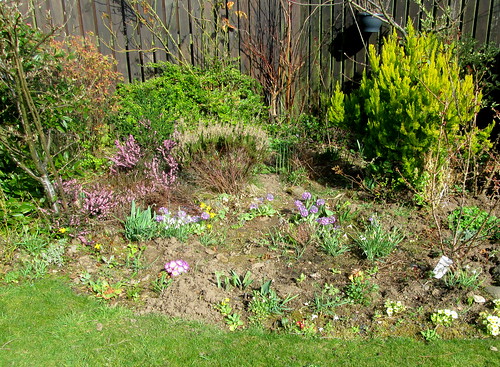 Since these photos were taken the garden has had a good ‘redd up’ that’s another Scottish phrase meaning tidied up. There was a whole winter’s worth of dead leaves and broken branches. 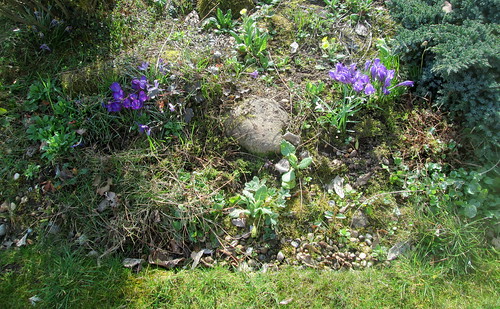 There are a lot of primroses around, I think I only had one plant to begin with, they’re great at self-seeding in this garden. 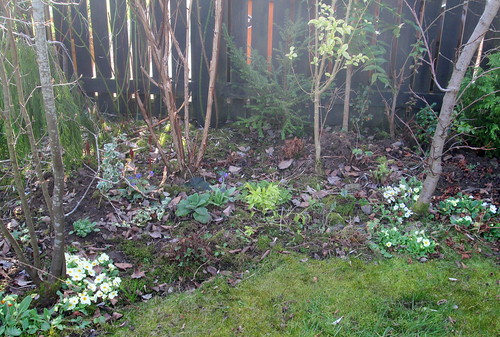 The one thing that does really well in my garden is moss, it grows abundantly on the soil and the grass. Looking on the bright side – I won’t have to buy any sphagnum moss to line hanging baskets! 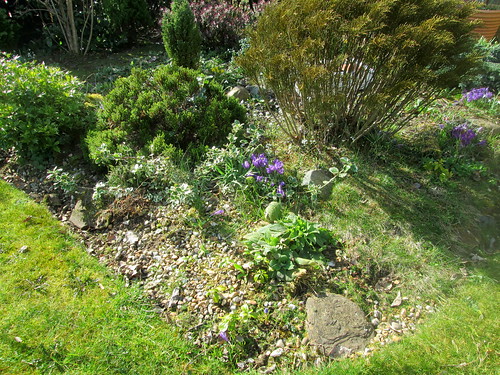 The Belfast/butler’s sink in the background is a fairly new acquisition which is needing work done on its surroundings. I plan to entice birds into it, it should make a good big bird bath. In my previous garden I had a bigger one and I put some water plants in it, it was very popular with the blackbirds but I’ve only seen a couple of magpies in this one so far. Luckily they were together so it was two for joy! 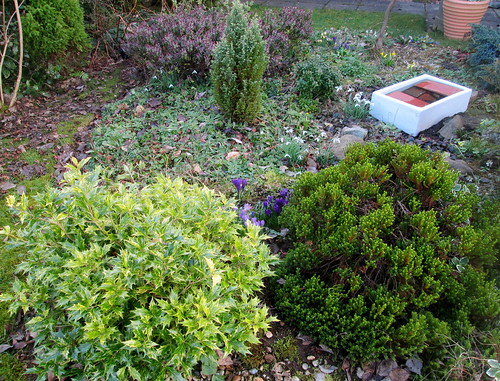 I’ve been hard at work in the garden digging up more turf and I’m waiting for a delivery of gravel to arrive. Jack is very happy to have less grass to cut.

What else have I been doing apart from gardening and reading a lot? Well, last Friday we drove to St Andrews, it was really quite exciting to travel more than five miles, just lovely to see some different scenery for a change. It started out so bright but it got duller as we reached the coast. Below is a photo I took of one of the beaches in St Andrews. It was very quiet by the time we walked back towards the town. The wee cottage on the left hand side of the photo is the lifeguard centre and the ruins of the cathedral are almost in the centre in the distance. 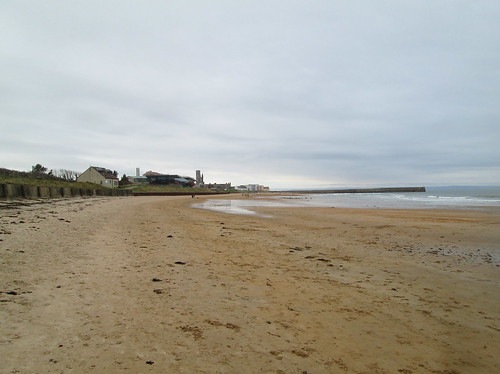 The town itself was very quiet too, the only shops open in Scotland are shops selling food so it was only the ice cream shops and a posh whisky shop which were open. I’m presuming that as the whisky shop also sells shortbread that was the reason it was allowed to open!

I could only stand and gaze at the secondhand bookshop, my nose wasn’t quite pressed against the window, but it wasn’t far off. I think it might be open again in about five weeks from now – one person in at a time – or two from the one household no doubt. 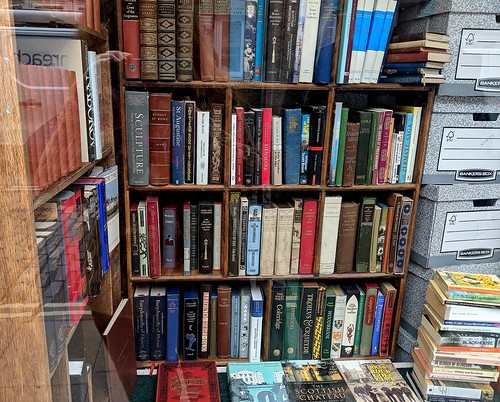 12 thoughts on “My Garden and St Andrews, Fife”