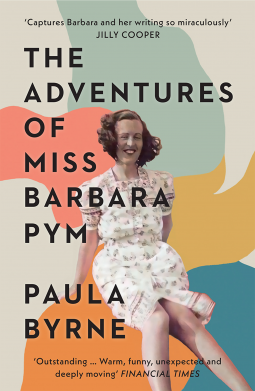 I read most of Barbara Pym’s books back in the 1970s and enjoyed them, so when via NetGalley I was offered the chance to read The Adventures of Miss Barbara Pym by Paula Byrne I was keen to do so. Not for the first time though where authors are concerned I wished I hadn’t because I found Pym to be quite unlikeable. Paula Byrne has written the book using Pym’s diaries, but as Pym had obviously intended that they would end up in some sort of archive and had an eye on her posterity I can’t help wondering how honest the diary is. Also lots of pages had been torn out, Byrne assumed that those pages were seen as being too revealing on reflection and assumed they were about her sexual exploits – and for those days she was certainly adventurous it seems. She was no virginal spinster, which is fair enough although unusual as at a time when the male students and dons at Oxford had to resort to prostitutes in Oxford or further afield in London, as most women were terrified of getting pregnant. Barbara Pym was literally stalking men that she fancied and falling into bed with them. Some have taken this trait of hers as proof that she was a woman before her time. If you see being a modern woman as being a victim of philandering, arrogant and self-centred men then she was indeed a woman before her time, I think she was just incredibly immature and niave. It would seem that she never got beyond the obsessive crush stage that was so common among the young girls who were starved of male company at the boarding school she attended. She also adopted alternative personas. I can just imagine all those misogynistic dons at Oxford rolling their eyes and commenting to each other that they knew it would be like this when women students were accepted!

In 1934 she went to Germany and became besotted with Hitler, stalking him and frequenting the restaurant she knew he used. Of course she ended up falling for a Nazi close to Hitler, Friedbert Gluck was an SS officer. On her return to the Oxford village she was living in she saluted the local shopkeeper with a Heil Hitler while wearing a black shirt and presumably the swastika pin her Nazi boyfriend had given her. Truly the locals must have wondered whether to laugh or cry. It was only after the outbreak of WW2 that she thought she might have been wrong about the Nazis but she was still hankering after Friedbert. She even had to be advised to expunge the Nazi/German bits in one of her books before sending it to a publisher. She definitely lacked a moral compass!

Sadly she never matured and was still falling for completely unsuitable men in her old age, an almost forty year age gap didn’t seem to bother her. The poor lad! Never much of a looker she was described as looking like Joyce Grenfell (comedienne) but she had a thing for tall, dark handsome men who went on to marry someone else, or else were homosexual. During the war she was living in a shared house with another woman and her two children, the woman was described as her best friend, but when that friend’s philandering husband came to visit his family it didn’t stop Pym from falling into bed with him instead of leaving him to his wife and children. Her poor so-called friend must have thought – et tu Barbara! But of course when he did get a divorce from his wife, he married another woman.

So it would seem that Barbara Pym had no conscience whatsoever when it came to men, sex and Nazism and was a nightmare neighbour as she spied on them to use them as characters in her books, even stalking them when they left their house. Whatever happened to using your imagination?!

Strangely there’s no mention of fear of getting pregnant in this book, that was what stopped most women from sleeping around back then. Pym’s father was the illegitimate result of a seduction between a 16 year old ‘young master’ and a 19 year old housemaid, his mother. Barbara knew about that as her father was quite proud of being a by-blow of a wealthier family. Possibly she thought that if she did get pregnant then it would lead to marriage.

I read most of Pym’s books back in the 1970s and had a re-read of a few of them a decade or so ago and didn’t enjoy them as much as I had when I was younger, although there is some witty dialogue, but it would seem that she was really just recounting things she had overheard people saying.

Im later years Barbara Pym lived in fear of her younger sister Hilary re-marrying as they were living together, and Hilary was really supporting Barbara who earned very little money. There’s a lot more in this book but not much of it is admirable, you’ll have gathered that I was less than impressed by her adventures.

I’ve always wondered about the authors that weren’t championed so vociferously and publicly on TV by Lord David Cecil and Philip Larkin, which is what kick-started her writing career when it was floundering. It’s handy having friends in high places!