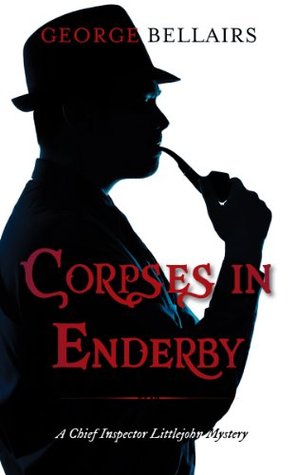 Corpses in Enderby by George Bellairs was first published in 1954 and I read it on my Kindle, the first time I had used my Kindle for ages because I much prefer actual books, for one thing you can flick through them easily to remind yourself of details, and put bits of paper in the pages. I did use the notes bit on my Kindle but now can’t get into them! Modern life – huh.

Anyway Corpses in Enderby if I’m recalling correctly more or less begins in a pub in a small English town where there’s a bit of a ‘stooshie’ because a local businessman Ned Bunn has refused to help one of his neighbours who has a dying wife and needs some money. Ned Bunn is obviously not a good guy and the neighbour swears he’ll kill him. When Bunn leaves the pub to walk across the road to his ironmonger’s shop and home he’s furious to discover his daughter and shop assistant having a bit of a canoodle. The widowed Ned Bunn is determined to keep his daughter a spinster so that she can look after him, he has seen off her previous boyfriends. As he throws the poor man out into the street there’s a huge bang and Ned Bunn is dead, but who did it?

The local police waste no time in calling in Scotland Yard in the shape of Inspector Littlejohn and his assistant Cromwell. It turns out that the Bunn family is a big one and they’re all obsessed with money and Ned Bunn had been the top of the pile. In fact there is more than a baker’s dozen of Bunns and also an awful lot of other characters with names beginning with ‘B’, it’s a bit bizarre!

I enjoyed this one, there’s more murder, quite a lot of snarky humour and some entertaining female characters. I really like Inspector Littlejohn and his side-kick Cromwell so I’ll look out for more of these books. I got this ebook free from the George Bellairs Estate. Thank-you.

Blood on the Mink by Robert Silverberg was first published in 1962 and at 156 pages it’s a really quick read. I’ve been having trouble settling down to read and had tried and failed with a few books before this one unexpectedly hit the spot.

The setting is 1950s America, starting in Chicago before moving on quickly to Philadelphia – apparently the City of Brotherly Love. Someone is printing loads of counterfeit US money in Philadelphia and it’s almost indistinguishable from the real thing. The government sends Nick an undercover agent there to infiltrate the gang responsible and to find out where the currency is being printed.

It all gets very complicated and more than a wee bit dangerous, but Nick is a good guy always aiming to wing not kill, which is more than can be said for the gangsters. This is well written but very much of its time so there’s quite a lot of 1950s style sexism, if that bothers you then this might not be for you. Maybe there’s something wrong with me, I just find it quite amusing and quaint nowadays. There’s quite a lot of humour. It all helps to set the scene. Philadelhia is portrayed as being a very strait-laced and boring place, you can’t get a drink after midnight and nothing at all is open on a Sunday – very similar to Scotland until fairly recently, but apparently unusual in 1950s America.

Robert Silverberg is better known as a very successful writer of science fiction, but he wrote all sorts of things when he was starting out in his career. He wrote a very interesting afterword to this one which had initially been rejected, it was a difficult time for writers and publishers (when is it not?) and magazines were going to the wall. A magazine publisher decided he might have more luck publishing a novel and Silverberg offered him this old one of his. He was paid $800 for it which apparently had buying power of about $8,000 then. How lucky was that?!

This book also contains a couple of short stories – Dangerous Doll and One Night of Violence.