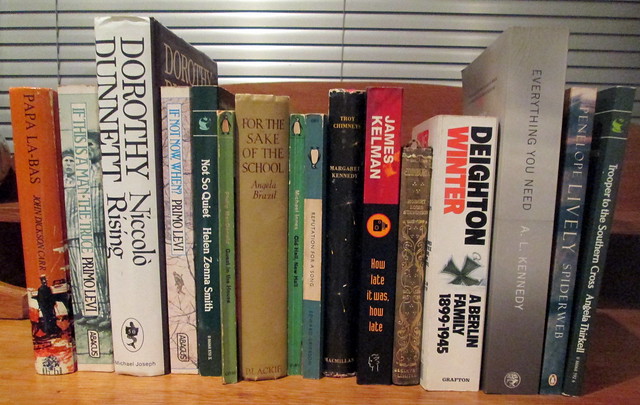 Have you signed up for Peggy Ann’s Read Scotland 2014 Challenge yet? If not then have a wee think about doing it as I’m sure you could read at least 3 or 4 books which would qualify for it without even realising. For instance did you realise that Ian Fleming would fall into the category of Scottish author, and almost all of the children’s classic authors were Scottish or of Scottish descent. Now that Jack has actually retired he is going to do this challenge, his first ever, he should have much more time for reading now, have a look at his post about it here. We will both be doing the Ben Nevis which is 13 books but we’ll end up doing far more than that I’m sure. In fact I think I might manage a purely mythical Jings, crivens and help ma boab category, and if you’ve ever read Oor Wullie you’ll know that those are all words which are used to mean flabbergasted, astonished, for goodness sake! Because I plan to read about 50 books for this challenge.

To begin with I’m reading Walter Scott’s Ivanhoe over the month of January, doing it in four chunks and writing about it each week. Join in with me if you think you’re hard enough! Judith are you still up for it?

At the same time I intend to read Lanark by Alasdair Grey as a respite from Ivanhoe. Lanark was voted the second best Scottish book recently, the first was Irvine Walsh’s Trainspotting but I don’t fancy that one at all. Below is a list of some of the Scottish fiction authors that I’ll definitely be reading during 2014, I’ll be adding more though. Books with a Scottish setting are also eligible for the challenge. Have a look at the Scottish Books Trust for more inspiration.

If I read just one by all of these writers then I’ll have bagged Ben Nevis and then some, but I still have my non fiction books to look through and list, it looks like 2014 is going to be a very Scottish (parochial) year for me!

Oh and I’ll be writing about some of the many children’s classics which are suitable for this challenge. You’re never too old for a good children’s book. Remember that you don’t have to have a blog to take part in this challenge.

Thanks for setting this up Peggy Ann.