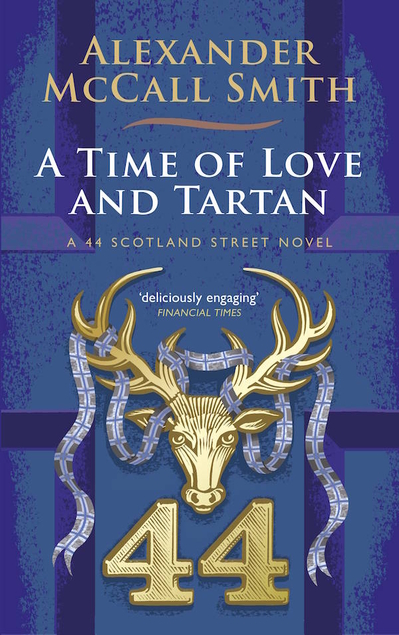 A Time of Love and Tartan by Alexander McCall Smith is one from the author’s 44 Scotland Street series and the setting is of course Edinburgh although towards the end of the book there’s a bit of a keek into Orkney. This book was published in 2017 so I’m a bit late in getting to this Scotland Street catch up. These books aren’t great literature, but it’s always good to find out what is happening to the inhabitants. Bertie is probably everybody’s favourite character and he’s still seven years old, he seems to have been seven for about three books. and he’s a bit of a miracle child as he has managed to survive and even thrive despite the behaviour of his ghastly mother Irene. At last it seems like things are looking up for him and his father Stuart, there are changes afoot for them. Will they ever get to that promised land – Glasgow? It’s a place they both hanker after although Bertie had decided that he would have to wait until he was 18 before moving there.

Pat has an encounter with Bruce her ex boyfriend, it’s one of those moments when all readers will be saying – no don’t ever go back!. Matthew, the father of triplets gets into a very embarrassing situation involving an old teacher of his. The newly married Domenica is wondering if she has done the right thing and Big Lou is as ever keeping everyone going with her coffee.

The doings of the characters are interspersed with lots of philosophical and ethical meanderings and even some comments on artists by the Scotland Street artist Angus Lordie.

Alexander McCall Smith uses these books to register his own opinions about modern life, and in this one he takes on the rampant feminism that we have in many government workplaces now where he believes men are at the bottom of the pile when it comes to promotion as political correctness has gone crazy. I think that any job should go to the best candidate, no matter which sex they happen to be, so I have sympathy with his sentiments. This is an enjoyable read, although a bit disjointed.

I had to go to the library today to pick up a book that I had requested called The Love-charm of Bombs Restless Lives in the Second World War. I know that I scooted over to the Fife libraries catalogue after reading about it on someone’s blog – but of course I can’t remember which blog.

I had truly intended staying away from libraries so that I wouldn’t be tempted by the books because it’s absolutely fatal to the ever growing piles of unread books of my own. Inevitably I also borrowed The Driver’s Seat by Muriel Spark and A Time of Love and Tartan (a 44 Scotland Street novel) by Alexander McCall Smith. Well those ones will count towards my personal reading Scotland challenge.

On a more personal note – I’m going to get my hair cut tomorrow! Who knows what I will end up looking like? Past experiences have made me quite hair salon phobic but anything must be an improvement surely as at the moment I feel like Dill the dog from The Herbs and if you want to know what he looked like have a wee keek here. Minus the black nose of course.