Bookshelf Travelling in Insane Times was originally hosted by Judith at Reader in the Wilderness.

Jack took the above photo last week for his Bookshelf Travelling contribution, a wee bit of a cheat as it’s really a shelf full of my books! Anyway, I haven’t read them all but I have read and enjoyed the What Katy Did books by Susan Coolidge. This shelf houses What Katy Did Next and it was a Sunday School prize to Ina Scott in 1921. I don’t think I have a copy of What Katy Did nowadays, but I remember as I child that it left a deep impression on me and I swore that if I ever had any children I would always explain things to them – rather than just saying ‘No you can’t do that’.

I also really enjoyed reading The Old Wives’ Tale by Arnold Bennett, much more recently. You can read what I thought of it here. Actually I see that it wasn’t all that recently it was 2013 when I read it – how time flies.

The other two books that I want to highlight are books that I’ve never got around to reading. Westward Ho! by Charles Kingsley belonged to Jack’s Granny Margery Besford and she inscribed it in October 1909 when I think she was about 15. I have not a clue what this book is about. Westward Ho! is a town in England which is famous for being the only town in the UK which has an exclamation mark! It’s a lovely copy of the book and I really should put it on my Classics Club list.

The last one I want to talk about is The Cloister and the Hearth by Charles Reade. Again it belonged to Margery Besford but she got this one as a Sunday School Prize in 1909 from St. Gabriel’s Church, Govan – which is an area of Glasgow. At one point, in the heady days when there were quite a lot of secondhand bookshops around they all seemed to have at least one copy of this book on their shelves so it was wildly popular in its day. It’s 533 pages of very small print – I might get around to reading it it one day.

I see that there are quite a lot of books by Rudyard Kipling too. I have read all of these ones I believe, he is wildly unfashionable now, I suppose because he is wrapped up with ‘British Empire’ days, but last year I was in the St Andrews secondhand bookshop and there was an Americam tourist (not that old either) who was absolutely thrilled to discover a whole set of old Kipling volumes, he was buying them no matter what the flight weight restrictions were, so somebody is still reading them.

Have you read any of these books? Click on the photo to see it enlarged.

Other Bookshelf Travellers are:

A Son of the Rock 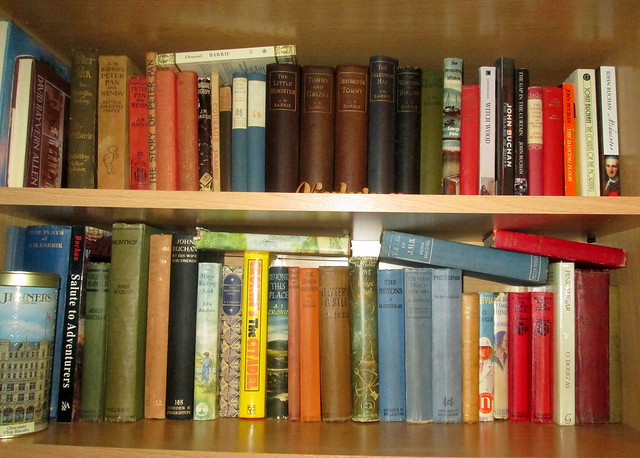