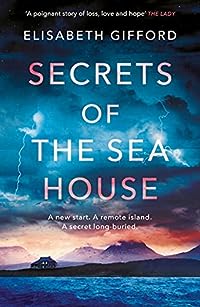 The action in this book flips between Scotland in 1860 and Scotland in 1992, mainly on Harris, a Hebridean island. Michael and Ruth have bought an old manse with the intentions of refurbishing it and turning it into a guest house. A tiny skeleton is discovered in an old tin chest underneath floorboards in what they are calling the Sea Room and Ruth is amazed when she realises that there is only one leg bone. Of course the police have to be involved but it turns out that it is a very old skeleton, so nothing that the police need to worry about but Ruth, who is herself pregnant is fascinated by it and naturally wonders about the story behind it.

In 1860 Scotland, the Reverend Alexander Ferguson has an interest in evolution and wonders if there is a possibility that such things as mermaids existed in the past. There have always been folk tales of such things. He wonders if they did exist, was it possible that they were an evolutionary step, such as Darwin was writing about.

The local landowner has decided that he will get rid of the islanders and replace them with sheep, a far more lucrative business for him, and the Reverend Ferguson is horrified to discover that he is being involved in the ghastly task of clearing the land of his congregation. Ruth has had a dysfunctional childhood so she has lots of demons from her past to deal with and they’re all coming to the surface with her own impending motherhood.

The actual stories were enjoyable and well written, but not researched at all and the mistakes drove me round the bend, but if you aren’t Scottish then you probably won’t know about all the things that are wrong.

However this book could have been doing with being better edited, silly things like one character going to get her hair permed every week!!!! obviously that isn’t possible. That should have been shampooed and set every week as I think you can only have a perm every 6 months, if you had one every week then your hair would quickly fall out and you would have no scalp left at all, those chemicals are fierce. Also on page 217 the reverend is described as wearing a white surplus, it should of course be white surplice.

But THEY always say that you should write about what you know about, or at least make sure that you research your subject. Sadly Gifford is absolutely clueless about religion in Scotland and she got herself into a right fankle/tangle. At first I couldn’t figure out which variety of Presbyterianism Alexander Ferguson was but I settled on the Free Church of Scotland, mainly because of the mention of Gaelic psalms being sung in his church, but the clothes which he was wearing would never have been worn by any sort of Presbyterian minister, never mind a ‘Wee Free’ – who have been described by a friend of mine as black belt Protestants. A satin stole was mentioned at one point and any minister who wore something as frivolous and vain as that would soon find himself without a church and congregation. They apparently went to ‘matins’ – oh no they didn’t! A black graduation gown over a black suit was/is what Presbyterian ministers wear in the pulpit. Ministers in most Scottish churches have always had to do what amount to auditions and the congregation votes on them, fire and brimstone was the order of the day, if the minister wasn’t seen as being strict then he probably wouldn’t have got a congregation and church at all.

The mention of the surplice (surplus !!) being worn by Alexander whilst he was conducting a service, that’s the white smocky thing which is worn by Scottish Episcopalian and Roman Catholic priests, is completely alien to any form of Presbyterianism. But when Alexander went to Morningside to visit his bishop towards the end of the book I was actually groaning out loud. The bishop referred to Alexander’s time as a curate!!!!

The whole reason for the Scottish Reformation was to get rid of such things as bishops, the congregation is in control and there’s also no such thing as a curate unless it’s an Episcopalian one. So Alexander could never have had a bishop. At one point there are people crossing themselves!! Well I swear I could hear John Know birling in his grave, about 20 miles away.

To be fair Gifford does give thanks to a lot of people who helped her with this book, including a reverend somebody. I’m assuming that they didn’t actually read the book otherwise such glaring mistakes should have been pointed out to the author.

I read this one as part of the Read Scotland 2014 challenge and it has a wide variety of possible books which will fit it as they don’t have to be by Scots but can just be set in Scotland, or be written by an author who is now living in Scotland, but there is a vast difference between Scottish authors and authors who use Scotland as their setting – just saying.

Last night I fancied a treat so I unwrapped a creme egg, my first of the season. I actually paused before chomping into it because that first bite is always a bit scary as the chocolate is so thick at the top. The worst happened I’m afraid and a front capped tooth sheered off, so I had an unexpected trip to my dentist in Glenrothes today to begin to get it all sorted out. I’m now exactly like that girl in the advert which warns you to take care of your teeth – or else!

Anyway, after the dentist I had a look around the town and went into The Works, more in hope than expectation really because their choice of books has been dire the last year or so, but I was in luck. They were having a stock liquidation sale and they had quite a lot of books at the princely sum of £1 each and amazingly there were four that were worth buying. So I bought:

The Land of Green Ginger by Winifred Holtby. I read and enjoyed South Riding years ago and I’ve been meaning to read this one for ages.

Marking Time by Elizabeth Jane Howard. Apparently this one was on Radio 4’s Woman’s Hour but I missed it. I like her writing, sadly she died just a week or so ago, but I suppose she had a good innings – as THEY say.

Every Man for Himself by Beryl Bainbridge. I’ve enjoyed quite a few of her books, this one is yet another Titanic setting which did put me off a bit because I think that that subject has been overdone in the past but I’m sure I’ll enjoy this, if that’s the word in the circumstances.

And lastly, Some Must Watch by Ethel Lina White. I’ve never heard of this author before but it’s vintage crime and apparently this book inspired the classic film The Spiral Staircase. I thought that would have been inspired by the Mignon Eberhart book of the same title, but I bow to their superior knowledge!

Crazily, on the way home I dropped into the museum shop as it’s a good place to get unusual cards and I made the mistake of hopping into the library next door, which due to the refurbishment is now only one step away. I couldn’t resist the new books shelves and ended up borrowing:

You might want to have a listen to Pam Ayres reciting her poem – I wish I’d Looked After My Teeth. – It’s exactly how I feel although of course I don’t have her rural English accent. But ‘tak tent’ (pay attention) as we say or used to say in Scotland, and if I ever eat another creme egg I’m thinking that I might just bash it on the head with my rolling pin, to soften it up first. If you have a better idea of how to go about eating one safely, let me know!