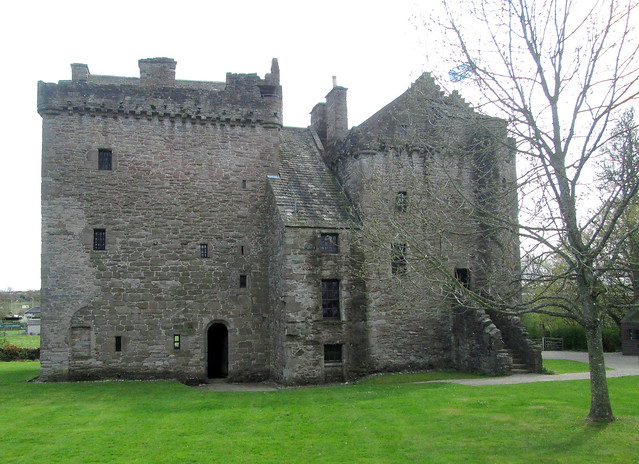 It’s a couple of months since we went to visit Huntingtower Castle near Perth and I had forgotten that I hadn’t blogged about it until Joan of Planet Joan mentioned that she had just finished reading John Buchan’s book Huntingtower. I read it a while ago and you can read what I thought of it here. You can read Joan’s thoughts on Huntingtower here.

Actually I’m not at all sure now if it is the same Huntingtower as the book was set mainly in the south west of Scotland, but I imagined they moved the action here, I can’t see anything linking this place to the book though. 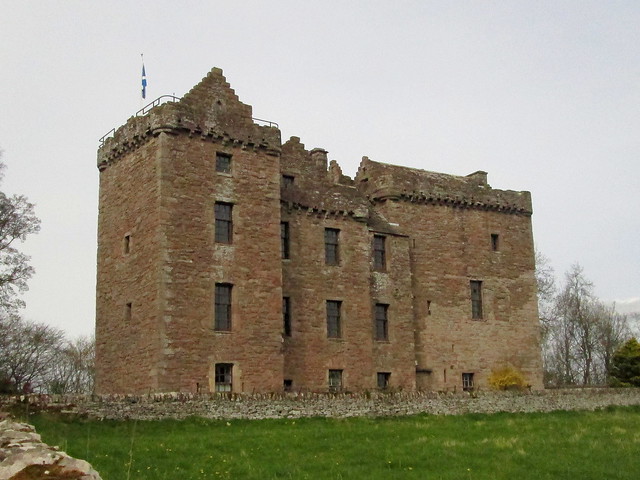 Parts of the tower have windows and other bits are quite open to the elements. Below is a doorway which still has some of the original painted decoration around it, I think it’s quite modern looking. 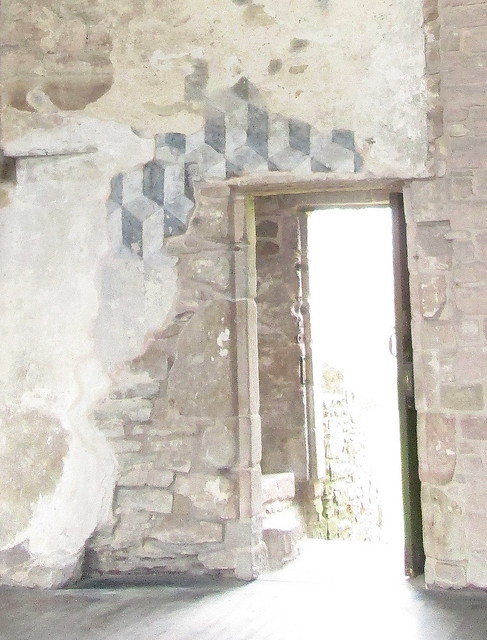 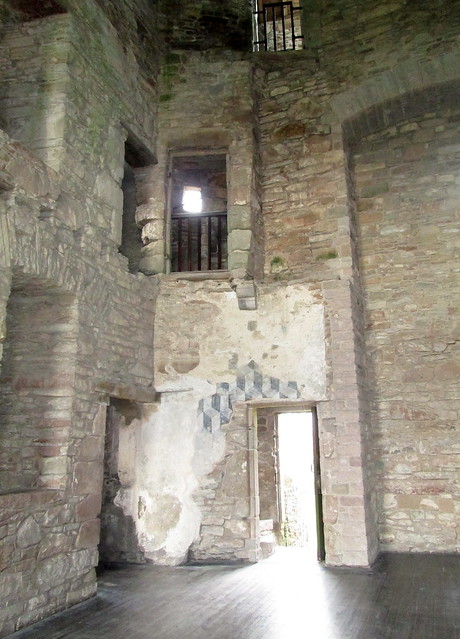 And what do you think of the painted ceiling? A few of the rooms had designs like this painted on the roof beams. This ceiling dates from around 1540. 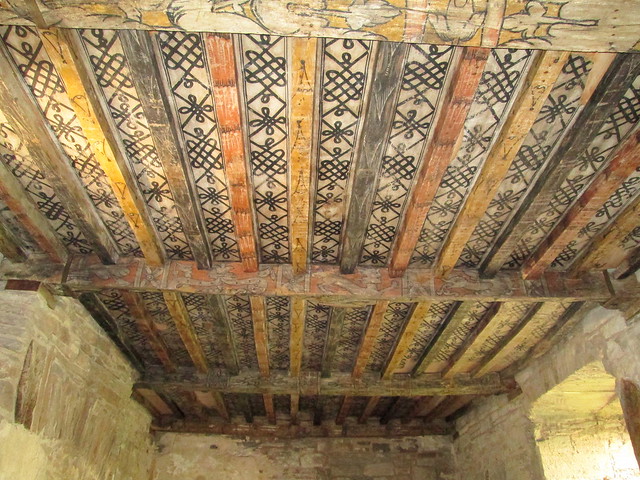 Below is a vaulted ceiling on the top floor. 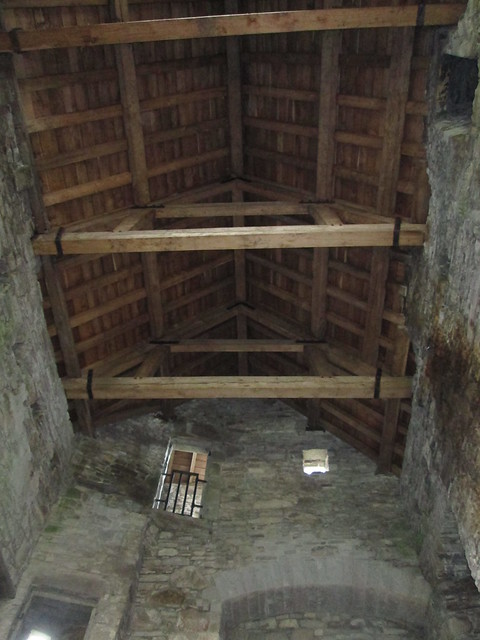 Can you see the rabbit painted on this wall? It has been covered with thick perspex to protect it from the weather. 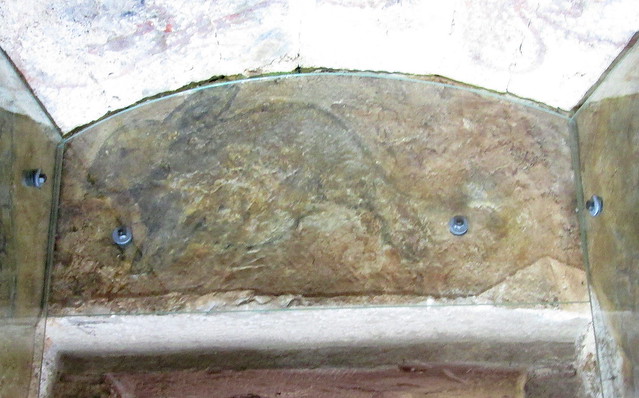 Below you can see the holes where the wooden beams of the floor/ceiling were originally. 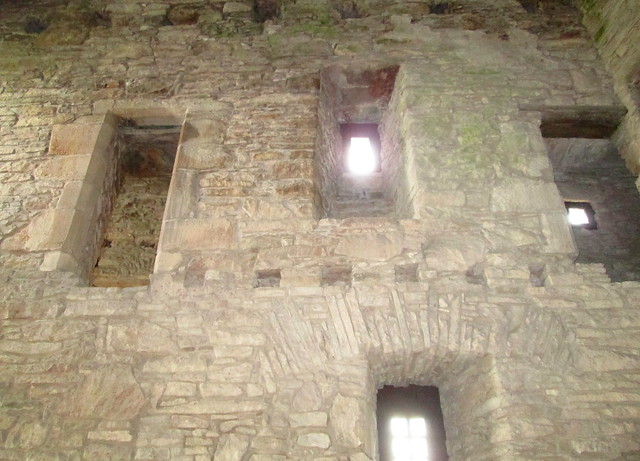 Most Scottish castles/tower houses seem to have these cute wee window seats, they must have been lovely to sit in in the summer anyway, a perfect spot for reading or sewing. You have to imagine the rooms would have been hung with tapestries and cushions or fur would have been on the seats. 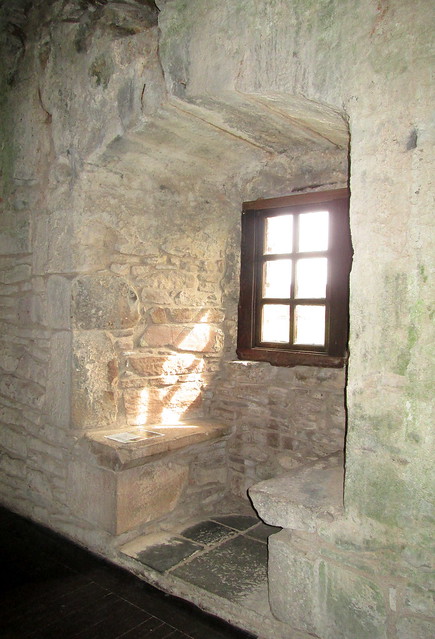 There are loads of spiral staircases to investigate in Huntingtower and one of them leads up to this part of the roof. 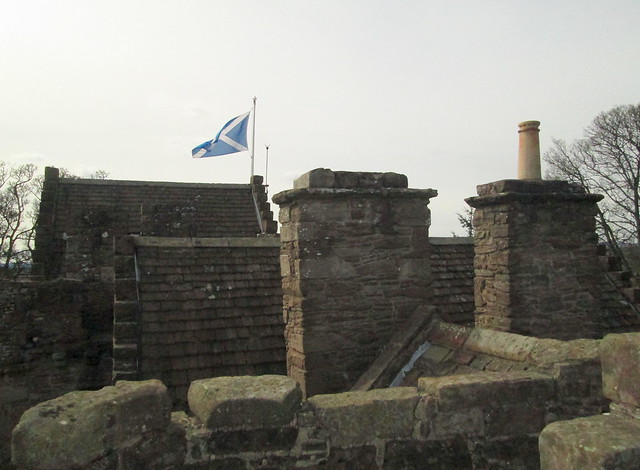 Although there’s now a shopping centre very close to Huntingtower most of the surrounding countryside is still farmland, so not too different from how it would have been when John Buchan set part of his book Huntingtower here. 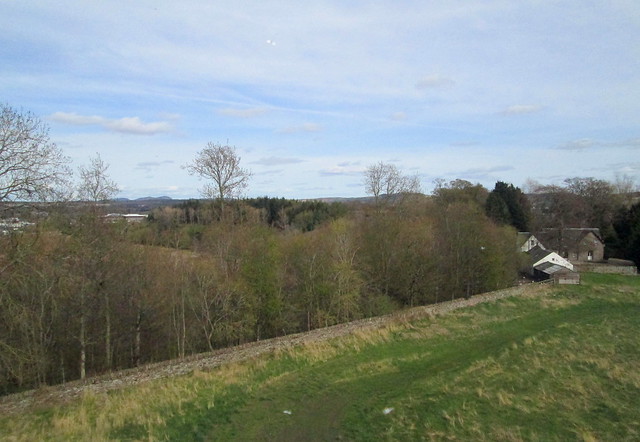 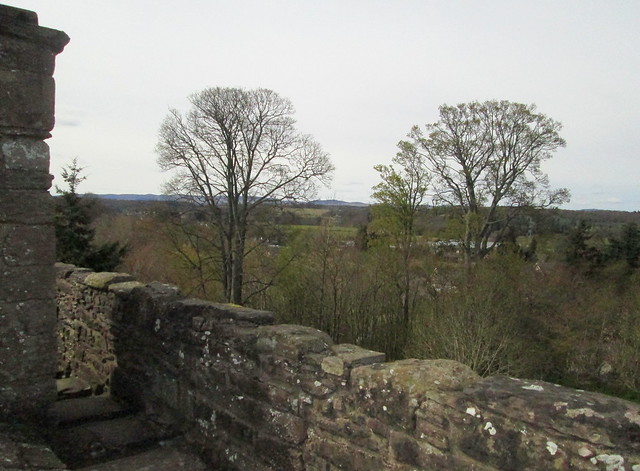 The castle is now home to a large colony of pipistrelle bats, but we didn’t see any evidence of them, it was too early for them to be out and about.

Mary Queen of Scots lived here for a while with her husband Lord Darnley, she seems to have been in just about every castle in Scotland, often as a prisoner. She was a woman who should have copied her cousin Elizabeth of England’s style and stayed well away from marriage!

Huntingtower was first published in 1922 and is quite different from the other Buchans which I have read (the 39 Steps and Greenmantle.) Unusually, it has a bit of romance in it. This one is set in Scotland in he spring of 1920, starting off in Glasgow and moving on to the south-west of Scotland.

Dickson McCunn has just retired from a very successful business as a grocer in Glasgow. Having sold the business he is very well off, but with his wife having a holiday at the East Neuk Hydropathic (spa), he decides to take himself off on a walking holiday in the south-west. On his wanderings he meets a young Englishman by the name of John Heritage who has been in the First World War and is now a paper maker with hopes of writing poetry. They discover that they both have a love of literature and a friendship ensues.

Meanwhile, the Gorbals Die-Hards – a gang of five young lads from Glasgow who are known to McCunn have been given some money by a well wisher so that they can go on their idea of a Boy Scout camp. They are far too poor to be able to join the real scouts as they mainly have no parents at all or are just completely neglected.

Whilst walking through a remote coastal village McCunn and Heritage discover a mystery involving the factor of the local mansion and they uncover the fact that two women are being held captive there. One of them is Saskia, a Russian princess. (Remember that this book was written not long after the Russian Revolution.) At the time there were rumours that one of the Romanov princesses had managed to escape from Ekaterinburg. There were certainly plenty of ‘white’ Russians who had escaped to other parts of Europe including Britain.

The Gorbal Die-Hards are coincidentally camping nearby and become involved in the adventure. It’s a bit like a fairy-tale for adults really.

I enjoyed this book but I think that it might be annoying for people who find reading a Scottish dialect difficult. The Gorbals Die-Hards speak in particularly broad Scots but they are the best part of the book really. There is a very good glossary at the back of the book plus copious notes.

John Buchan had been a favourite author of the Russian royal family. His previous book Greenmantle was a great hit with them. I just wonder if they managed to take a copy of it to Siberia with them.