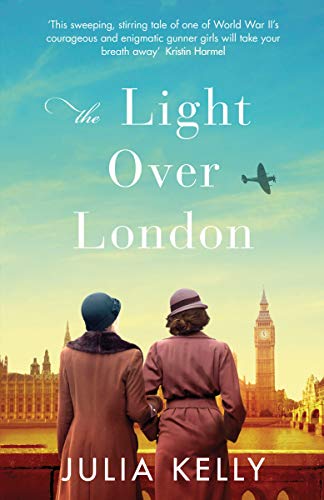 The Light Over London by Julia Kelly was first published in 2019. It’s a dual time novel with the setting being in WW2 London 1941 and 2017 Gloucestershire. This type of structure often works well but at times they can be annoying if you are enjoying the story and the timeline suddenly switches away from it. The author is American but is now living in London.

Cara has recently divorced and relocated to Gloucestershire where she has got a job with an antiques dealer who does house clearances. When she finds a wartime diary in an old tin while helping with valuations and house clearing she asks her boss Jock if she can keep the diary and he’s happy for her to do so. The diary has been written by a woman who had run away and joined the army to do her bit, rather than stay at home and marry the young man that her rather bullying mother had planned out for her future.

The diary comes to an abrupt end and Cara is keen to find out what happened. She’s helped in her task by Liam, her new and rather good-looking neighbour. So the book contains two romances and a bit of a mystery, unfortunately for me it just didn’t work, in fact there are so many anomalies in the writing that I took to keeping a note of them, this might seem like nit-picking but if you are setting a book in England and all the characters are English then it’s important not to import Americanisms into it as it jars so badly.

The most obvious one was the use several times of the word purse where it should have been handbag.

The word blond was used to describe a woman but the ‘e’ also appeared in the next sentence, otherwise it was without the ‘e’.

The word stand-down was used in relation to the end of the war.

Ticket taker should be ticket collector.

Do you think Princess Elizabeth will serve? The phrase in the UK is/was join up.

Off ramp was used when it should have been slip road, and tea kettle was used instead of just kettle.

In other words the book is in need of being edited to weed out the incongruous Americanisms – as well as the cornier romance parts.