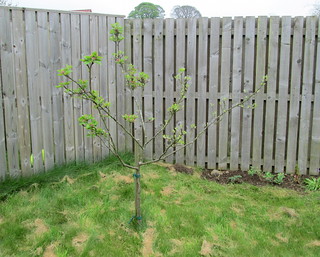 The wee apple tree in the photo above was the only plant which was in our new garden, it’s just about to blossom. As you can see if you look behind it, I’ve been busy planting already. I’ve added climbing roses, clematis, honeysuckle, deutzia, lady’s mantle, foxgloves, honesty and more. 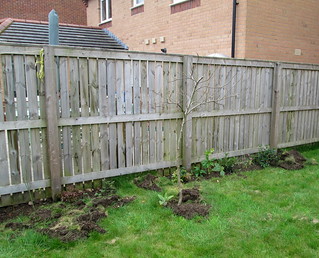 The border above is along one side of the garden and that is the bit which is quite claggy and dampish, so I’ve planted a fish-tail fern as well as several ordinary ferns, astilbes, snakeshead fritillaries, viburnum, pieris, skimmia and various other things which I can’t think of at the moment! 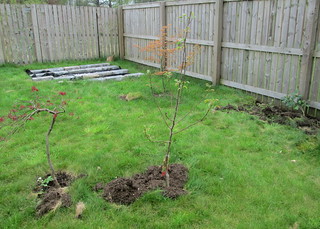 Above you can see an acer on the left, that is one of the few plants which I managed to take from my old garden. I’ve planted a pear tree next to it. This island bed is going to be extended eventually. The concrete blocks in the background were the foundations of a wooden summerhouse which the old owners took with them. Unfortunately they’re quite well cemented in and I don’t know what to do wth that area now, I don’t really see the need for a summerhouse when you have a sun-room.

Taking a last walk around my old garden was really quite emotional, for me it was far worse than looking around the house for the last time. The garden and the birds it attracted had given me so much more pleasure than the house did, I’m not a big fan of housework! 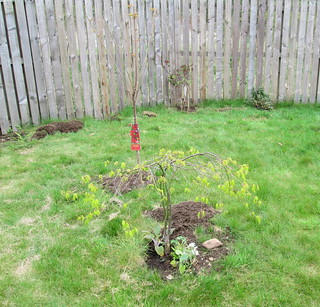 Above you can see the makings of another island bed with a different kind of acer in it and also a cherry tree. I really do miss the lovely old stone wall which was at the back of the old garden, and that needed almost no maintenance. It’s going to take us ages to paint this fence with wood preservative, it’s a lot of fencing, it’ll be like painting the Forth Bridge. 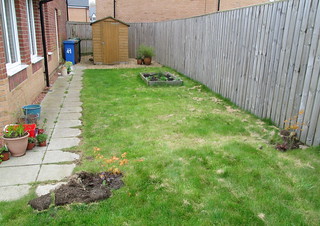 Above is a view of the utility side of the house, where the bins are kept and there is also a raised bed which the previous people made. There were a few sad looking strawberry plants in it but I’ve added more compost and also planted some herbs, rosemary, chives, thyme and also some shallots. I plan to add more veggies and make another raised bed there for spinach and various other things. There are two wee Japanese maples in the foreground, along with heucheras, these are the only plants which I’m a wee bit worried about. I think they might not like the location so I’m keeping an eye on them. I took these photos a couple of weeks ago and everything else seems to look quite healthy, especially the raspberry and Tayberry bushes, I think I’ll plant some more fruit bushes.

So as you can see, I’ve got my work cut out for me, and I’m going to be busy cutting out more of that grass, especially as there are loads of thistles coming up through it. Honestly, where is Eeyore when you need him!