Merry Christmas to you from me and my Merrythought Lads! It’s not going to be the Christmas that any of us were expecting or planning for, but there’s no doubt that keeping everything quiet and socially distanced this year is the sensible way to go. Then with any luck we can look forward to a more normal celebration next year. 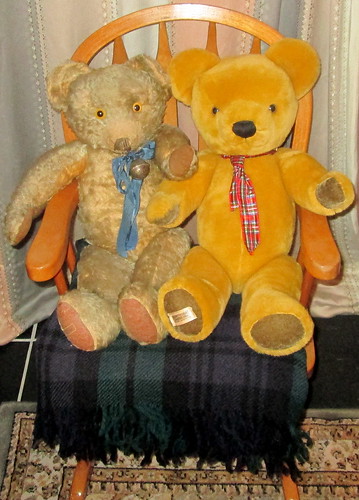 Geoff Farley on the left was named Farley by his original owner. I wonder if he was called after Farley’s Rusks. When I acquired him I added Geoff in memory of a great gardener – Geoff Hamilton. There’s no doubt that he is stricken in years, as many of us feel after such a rough year of bad news in the UK with Brexit and Covid to contend with.

Armstrong McGregor on the right is dapper and young in comparison to his companion, but not very young, and he’s been named after two great-grandfathers. Jack had one whose first name was Armstrong, and I had one whose surname was McGregor. I like the combination.

Fingers crossed that we all feel a bit more like Armstrong McGregor looks this time next year! Come on, own up – does your home shelter a teddy bear or two? I hope everyone has a lovely Christmas, free from stress and strife.