TracyK of Bitter Tea and Mystery and I decided to read this book, it was on our Classics Club lists and it was a good way of making sure that I got around to reading it anyway. You can read her thoughts on the book here.
The Master and Margarita by Mikhail Bulgakov was first published in 1966. My copy was translated by Richard Pevear and Larissa Volokhonsky in 1997.

This is a strange read and I can imagine that a lot of people might have given up on it, but I persevered as usual and thankfully ended up liking it.

It begins in Moscow where two men are sitting on a bench in Patriarch’s Ponds. One is a poet who has written a novel about Jesus and the other is an editor, soon they are joined by a foreigner, they can’t make up their minds whether he’s French – or maybe Polish. The foreigner tells one of the men how he will die. It seems so preposterous that they don’t take him seriously, but in no time the horrible prediction is fulfilled. The stranger was of course the Devil. He has red hair, as do lots of the characters in this book, and he has a large talking cat as a companion. They pose as a stage act in a Moscow theatre, supposedly illusionists and hypnotists, causing mayhem and becoming the talk of the city. There’s even a witch on a broomstick.

From time to time the book flips back to Judea – the poet’s novel. Pontius Pilate has been forced to condemn Jesus (Yeshua Ha-Nozri of Yershalaim ) to death because he was supposedly overheard complaining about the Romans. Pilate knows that the whole thing is just a way of getting rid of Yeshua who is seen as being a problem to some. It plays on his conscience. The author has never been able to get his novel published. He is The Master of the title and his married lover is Margarita. In despair he burns his manuscript.

Meanwhile there are lots of glimpses into how life is lived or endured in Russia. Neighbours denounce each other, with the death of one character so many people have their eyes on his flat, how can they get it for themselves? Communal kitchens are a way of life and you can’t get away from your neighbours.

As ever with translated books, and particularly when communist regimes are concerned, I have the feeling that I’m only getting the book on one level. I’m sure that for people who lived through those times there would be so many hidden allusions, and probably a lot of missed humour as humour seems to be the way people cope with adversity. It seems that despite communism, and with religion being frowned upon by the authorities, it didn’t stop people from knowing the bible well it would seem. This book even has four horsemen in it (as in the apocalypse?) – even though one is a woman.

I liked this one, despite the fact that for some reason Bulgakov gave all the ‘bad guys’ red hair – and there are an awful lot of them, so it was obviously not coincidence.

Apparently Bulgakov himself burned one of his manuscripts for fear of the consequences if it was found in his possession, though I believe there were copies elsewhere. 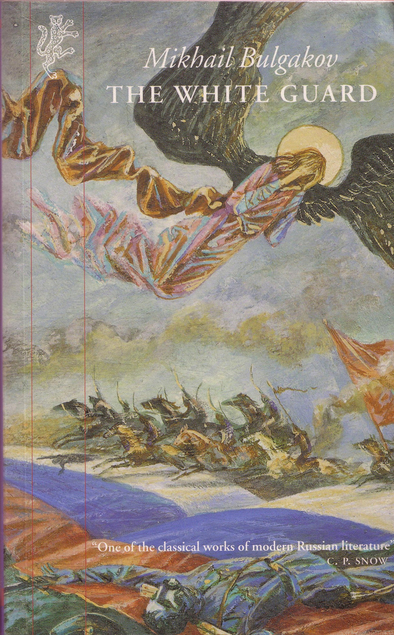 I got The White Guard in the Classics Club Spin which was almost ideal really as I was reading it while on my way to Russia, except I was going to St Petersburg, not Kiev which is the setting of the book which first appeared in serial form in 1925 but wasn’t published in book form in Russia until 1966.

The setting is the city of Kiev in 1918 – the October Revolution. The Turbin family had been well off but they’ve just lost their beloved mother. It’s particularly poignant as her eldest son Alexei had just returned from the front after serving for years in a disastrous campaign in the Tsarist army. At last the whole family is together, but without their mother. There’s a younger brother, Nikolka and a sister Elena who is married to an army captain and also Anyuta the maid all living in the family apartment but it isn’t long before Talberg the husband abandons them, running away to save his own skin, the brothers had never trusted him anyway.

The city is chaotic with the German army roaming around and various other factions trying to grab the power.

The Bolshevik thugs are running around in the city, attacking anyone that they recognise as having been an officer in the Tsarist army, and it’s very easy for the officers to be pinpointed. Criminals are taking advantage of the chaos to blackmail people into giving up their valuables. The apartment becomes a refuge for others sheltering from the violence.

This is a really great read, conveying the atmosphere of danger, fear and panic as the normal rules of society have broken down and nobody has any idea of what the new future is going to hold for them.

I’m going to be reading The White Guard by Mikhail Bulgakov for The Classics Club Spin # 20 as the number that came up in the spin is 19, and I have to read it by the 31st of May. I’m particularly pleased to get this one in the spin as the setting is Revolutionary Russia and amazingly I’m going to be in St Petersburg in May. Jack is insisting on calling it Leningrad as when he visited in the 1970s that was what it was called! I had been wondering which books I could take with me on my trip as it’s always good to read books that are set in places as you actually visit them, even if it’s now a historical book.

Otherwise, I had a lovely Easter Sunday, it was a gorgeous day here in Scotland, we were on the north east coast of Fife, so basically on the edge of the North Sea – not that I dipped any part of me in there, I left that to others. I did see a pod of four dolphins in the distance though. I took photos but I suspect that a magnifying glass will be required to see anything resembling a dolphin.

If you are doing the CC spin – are you happy with the book you got?

We walked to the sale which was in the Adam Smith Theatre in the pouring rain this morning. At one point I had a very long armful of books but I ended up putting more than half of them back as I reckoned that I wasn’t going to get around to reading them before we move house, hopefully in about a year’s time. We have so much ‘stuff’ to take with us that I don’t want to add too much to it. Having said that I still bought:

it was thirty years ago today by Terence Spencer – ‘An extraordinary document of life inside the claustrophobic capsule of The Beatles in 1963.’

The Beatles book is a pure nostalgia trip for me. My sister Helen is 11 years older than me but we shared a bedroom and in 1963 I was only 4 years old, she was 15, the perfect age for Beatlemania. George Harrison was always our favourite and we had a framed photograph of him on the dressing-table. (Whatever happened to it?) Who was your favourite?

So that was quite good, just six books, but I wish I hadn’t put the Edna O’Brien book back.

After lunch the rain cleared up and we took ourselves off to Perth as it was absolutely yonks since we had been to look at any shops.

The recession isn’t going to be ending anytime soon if we are being relied upon to spend money and help to drag us all out of it. We only bought one book each.

The Far Cry by Emma Smith. It’s a Persephone book and I haven’t read anything by her. It seems to be set in India, another Anglo-Indian book when I’m supposed to be reading more authentic Indian books.

The Master and Margarita by Mikhail Bulgakov and he got a Christopher Brookmyre book from the library sale – Country of the Blind.

The rain stayed off for most of the time that we were in Perth so we had a good stroll around the place before heading for home via Milnathort ice-cream shop. We indulged in double cones. I had chocolate and cream brulee – lovely. Husband had creme brulee and Bakewell Tart flavour. Next time I’m definitely having the Bakewell Tart ice-cream, absolutely gorgeous, and somehow I hadn’t fancied the sound of it.