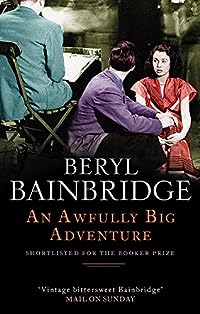 This is one of the books which I pulled out from that scary mountain of books on the left-hand side of the door at Voltaire and Rousseau, it was absolutely pristine (still is) and cost me all of £1. I bought it because of the Peter Pan connotations and Beryl Bainbridge had just been in the news because of her recent death, I hadn’t read anything by her for years. It was first published in 1989.

It’s set in Liverpool in 1950 and Stella has decided not to stay on at school. Her Uncle Vernon manages to get her a job as assistant stage manager at a local theatre. This involves being a general dogs-body to the company of actors and eventually getting small acting parts herself.

Stella’s character is an unusual combination of naivety and cheek, she gets on well in the theatre but has a crush on Meredith, the director who has converted to Catholicism, apparently because he’s after redemption. Which is just what we all said when Tony Blair did the same thing!

During rehearsals for Peter Pan disaster strikes and Meredith has to find someone else to play the dual part of Mr Darling and Captain Hook. The well known actor P.L.O’Hara rides to the rescue on his motorbike.

There’s quite a lot of tragedy one way or another in this book but it’s never depressing, partly I think because Beryl Bainbridge is so matter of fact about it.

Whilst reading it I thought to myself that it was quite similar to J.B. Priestley’s The Good Companions and I had planned to say that if you enjoyed that one you would probably like this. Then I read the back blurbs and The Sunday Times said:

Imagine Priestley’s The Good Companions as written by Gogol and you will have some idea of the mixture of waggish humour and sordid pathos in Bainbridge’s novel.

The book was made into a film starring Alan Rickman.

So there you have it, if you haven’t read anything by Bainbridge before, you might want to check her out to see if she’s your cup of tea.