Bookshelf Travelling in Insane Times was originally hosted by Judith at Reader in the Wilderness, then I took over for a while, but this will be my last such post as I’ve just about run out of bookshelves that I think people might be interested in seeing. This has been an enjoyable meme though and I’ve loved seeing books from other people’s collections.

On the left hand side there are a couple of books by the World War 1 VAD nurse Vera Brittain – Account Rendered and Testament of Experience, I gave Testament of Youth to my history teacher daughter-in-law. They’re interesting books, but Vera Brittain was a bit of a dichotomy as she was all for women’s rights, as long as the women weren’t her own servants – according to her daughter Shirley Williams.

I love Patrick Leigh Fermor’s travel writing, he began his adventures as an 18 year old, I believe after he was expelled from school. Those adventures and his knowledge of Greek were of great help during World War 2 when he joined the army and went undercover to what was then German occupied Greece. Not that he was very low profile as he ended up taking a German general prisoner!

The Little Prince by Antoine Saint Exupery is a lovely wee book. It’s beautifully illustrated by the author too.

The French dictionary is from my school days but it still comes in handy sometimes. At school I ‘did’ French, German and Latin and much more recently I’ve been trying to learn Dutch, but I don’t think I could ever get to grips well with any language unless I lived in the country for a while, well that’s my excuse anyway! Are you bookshelf travelling this week?

Vera Brittain and the First World War by Mark Bostridge was published in 2014 and it’s subtitled The Story of Testament of Youth. The author is quite an authority on Vera Brittain as he has written a biography of her and in the past has worked as an assistant to her daughter Shirley Williams.

I read Testament of Youth years ago, probably around about the time that the BBC dramatised the book in 1979, but I didn’t watch the more recent film because I didn’t see how it could possibly do the book justice in such a short time. The BBC serial is very good but I suppose it might seem a bit dated now, acting styles do change over the years.

I think that some people might be a bit disappointed by this book as it is an honest portrait of Vera’s life which if you have only read Testament of Youth might come as a bit of a shock. She did have a habit of re-writing history to put herself in a better light, or to make herself seem hard done by within her family.

The fact is that her brother Edward hadn’t intended to join up straight from school but Vera who was by this time 20 years old seems to have been so influenced by the jingoism of the newspapers and some politicians that she persuaded him to enlist – her argument seems to have been that people of their class should be patriotic. Their parents were completely against their only son joining up and Vera was such a snob that she told her father that that was his attitude because he hadn’t gone to a public (posh private) school and therefore wasn’t as patriotic. I think she was one step away from being one of those dreadful females who handed out white feathers to men. Edward seems to have quickly regretted his decision to join up when the reality of the trenches hit him. It’s easy to see why Vera re-wrote history as she should have been consumed with guilt.

Much was made by Vera of her difficulty in getting a university education, claiming that her parents were against the idea when in fact she was encouraged to go to Oxford and was financed by them. Perhaps she only wanted to make her story seem more interesting but it had the effect of putting her parents unfairly in a bad light again.

At Oxford she had her apparently usual reputation for being earnest and conceited and also had no sense of humour, something that was a drawback when the book was being turned into a TV series, but she did make some friends there before she decided to become a VAD nurse and do her bit in the war. Her experiences eventually led to her writing her famous book, aided by some diaries that she had written in the first years of the war.

It might sound like I’m being a moaning Minnie – I’m not, it’s just that Vera was quite a flawed human being, she was a feminist but a terrific snob, the sort of woman for whom women’s rights were only for upper class women, certainly not for her own servants.

This book also gives some information on the making of the film and BBC series and also of Virago reprinting the book which led to them. There are also quite a few interesting photographs.

The author does seem to have got to the bottom of the strange circumstances of Edward Brittain’s death at the front. This was an interesting read with Vera in reality travelling from jingoistic euphoria at the outbreak of the war to pacifism a few years later.

In recent years we’ve become used to hearing about what women did in wartime and I have tended to have taken for granted that women’s contributions had always been appreciated, so I was really surprised to read in this book that in the BBC documentary The Great War (made to commemorate the 50th anniversary) which has a total running time of over 17 hours only minutes were devoted to recounting women’s experiences. I’ve watched that whole series at least three times, and that had never dawned on me! This book is a good read.

I dug a lot of books out of the attic during my recent clean up and decluttering binge, and one of them was Testament of Youth which is Vera Brittain’s autobiography from 1900 – 1925, definitely one for keeping and re-reading. This book was first published in 1933 and the BBC dramatised it years ago. 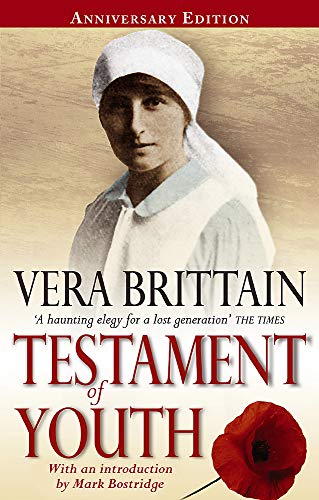 I think I saw the tv programmes first but soon after that I bought the book and the sequel Testament of Experience.

Vera Brittain was one of the very few women to get into an Oxford College in 1914 but after one year she gave up her studies to become a VAD nurse and ended up nursing in London, Malta and at the Front in France. It’s a heart-breaking read as all of the young men close to her are lost, including her fiance and her beloved brother Edward. But if you are interested in World War 1 then this is a “must read”.

Vera became a pacifist and was active in the League of Nations. She did get married and her daughter is Shirley Williams, who was once a lib-dem M.P. and is now in the House of Lords.

I think I’ll buy the dvds because I haven’t seen the series since it was first shown.
I like this anniversary cover although it isn’t the one which I have, mine has Cheryl Campbell on the front, she played the part of Vera in the series.