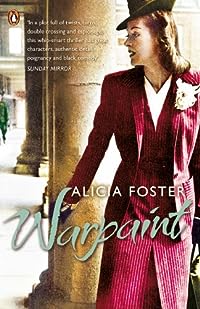 Warpaint by Alicia Foster was first published in 2013. The setting is 1942, Bedfordshire where in a villa close to Bletchley Park there’s a small community of people who are working to compile Black propaganda to send to Germany, with the idea of demoralising the German population. Some of them draw cartoons of the Nazi leaders and others write letters which are sent to the parents of dead German soldiers, supposedly from their sons who are claiming to be alive and well and living in England, happily.

Sam and Vivienne are a husband and wife working in the Black villa, with Sam being the head of operations, Charles and Frido are the others in the team. Frido is a ‘good’ German who is top of the Nazi’s most wanted list and knows all of the top Nazis so his knowledge and talents are invaluable.

Meanwhile, in London The War Advisory Art Committee has been set up, there’s a small community of women artists who have been given commissions to draw and paint scenes which portray Britain in wartime and capture the atmosphere and reality. They must conjure up the bulldog spirit.

Sir Kenneth Clark (Director of the National Gallery) has been given the job of getting the women to come up with the goods but he has passed the task on to Aubrey Smith, a much younger and inexperienced pen-pusher. As the whole war art idea came from Churchill it’s obvious that Clark wants to avoid the responsibility of the job as he has been having trouble getting any work out of the women.

Like everyone else at that time, their lives are anything but normal and the reader is drawn into all the personal problems which have come about mainly because of the war.

This book was right up my street, I loved the wartime setting which is inevitably tragic as all those ‘few’ were scrambling for their planes and all too often not coming back, as Dame Laura Knight was capturing the moments on canvas. It’s a thriller with lots of twists to keep you turning the pages.

This book weaves a couple of actual people with fictional characters, not something which I’m terribly fond of but I think in this case it works well, despite the fact that I couldn’t stand Sir Kenneth Clark, especially after reading Alan Clark’s biography where it was a toss up as to which one was the most ghastly – father or son.

Warpaint is Alicia Foster’s first novel and is very well written. She has a Ph.D in art history and teaches art students.

Like all good books, this one piques your interest in the subject and urges you to go and do a bit of research of your own.

Below are a couple of Laura Knight’s wartime paintings.

You can see a lot more of her work here and here.

Dame Laura Knight became the official artist at the Trials of Nazi war criminals in Nuremburg.